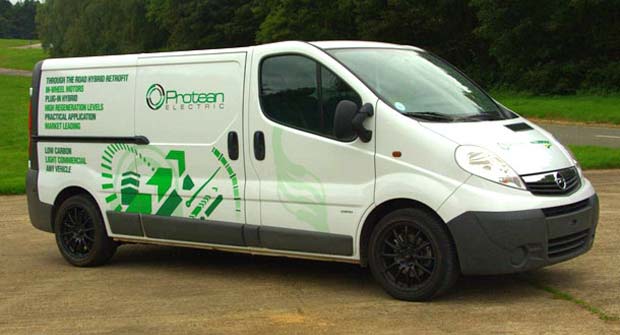 The latest application of Protean Electric’s in-wheel electric motor technology has made its US debut at the Management Briefing Seminar in Traverse City, Michigan, where Protean has demonstrated its wheel motors in a front-wheel-drive Vauxhall Vivaro diesel-electric hybrid light commercial vehicle.

The van was also equipped with a 21 kWh battery, giving it a range of 55 miles. While operating in hybrid mode, the Vivaro managed 114 mpg on the New European Drive Cycle — over three times the fuel economy of the standard vehicle.

Protean claims its patented direct-drive design ‘bolt-on hybrid’ system has the highest torque and power density of any electric propulsion system. The design has the rotor on the outside and the motor control electronics and regenerative braking on the inside of each motor assembly. Each Protean Drive in-wheel motor can deliver 110hp (81kW) and 590 lb.-ft. (800Nm), weighs only 31kg (68lbs), and fits within the space of a conventional 18-inch road wheel.

Michelin has been showing off versions of the “Active Wheel” since 2004. The system contains virtually all of the components necessary for a vehicle to propel or stop: an electric motor, suspension coils and springs, and braking components.