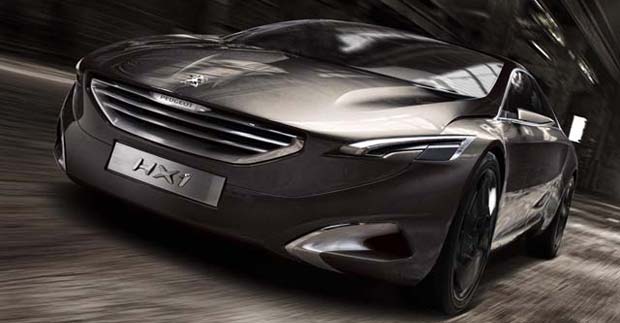 Peugeot will unveil the futuristic six-seat HX1 plug-in hybrid concept at the next month’s Frankfurt Motor Show, that previews a future flagship for the brand that combines elements of a luxury sedan and a low-roof, wagon-like MPV.

The Peugeot HX1 integrates HYbrid4 technology, an innovative modular architecture that figures in the Peugeot range on the 3008 HYbrid4, the first diesel hybrid in the world; technology which will also be present on the 508 RXH in 2012.

The principle behind HYbrid4 is clever, yet simple: With an internal combustion diesel engine at the front (powering the front wheels) and an electric motor to the rear (powering the rear wheels), this technology enables all four wheels to be driven when the engine and motor work together, for increased safety and traction in extreme conditions. It also enables the vehicle to be driven at low speeds powered just by the electric motor in ‘Zero Emissions Vehicle’ mode.

Under the bonnet of the HX1 the engine is a 204 bhp, 2.2 liter HDi diesel, linked to an automatic 6-speed gearbox; the same powertrain as that used on the 508’s range-topping GT version. Coupled with a 70 kW (95 bhp) electric motor, the combined output can develop a potential 220 kW (299 bhp).

However, one of Peugeot’s priorities is to maintain its position as environmental leader in the years to come. The HX1 therefore takes us one step further. It is equipped with ‘plug-in’ functionality: the lithium-ion batteries can be recharged by ‘plugging in’ the vehicle to a standard 240V mains electric socket. This means that it can have a longer ‘ZEV’ range, i.e.: it can cover up to 18.6 miles in all-electric drive mode. The HX1 thus obtains a combined fuel consumption of 88.2mpg (3.2 L/100km or 73.5mpg UK) with CO2 emissions of 83 g/km.

Designers placed adaptability at the heart of their creation: the Peugeot HX1 can change its aerodynamic profile to suit its environment, driving conditions and the requirements of its occupants.

Due to its many ‘mobile’ aerodynamic parts that were designed with speed in mind, the HX1’s unusual ‘MPV’ architecture, very low for a length of 4.95m, results in an exceptional Cd of 0.28.

Its four reverse-opening doors provide access to the interior of HX1, the Marque’s vision of a high-end passenger compartment, which combines elegance and modernity, natural materials and ultra-high technological specification. It offers its occupants an exceptional level of interior space, an innovative modular design with its original ‘4+2’ configuration, and provides the driver with a driving position that can be adapted to suit driving conditions.[wzslider height=”400″ lightbox=”true”]