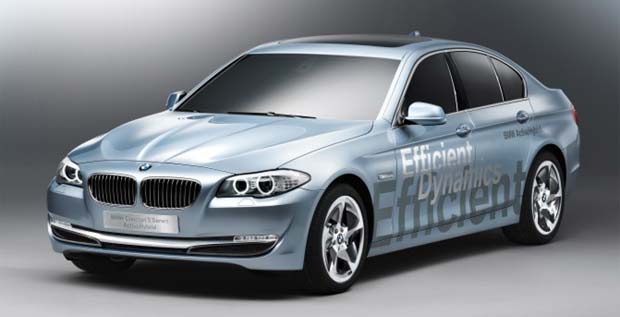 BMW will unveil a new plug-in hybrid version of the 5-series at this year’s Shanghai Motor Show in April.

The BMW 5 Series Plug-In Hybrid will be built upon the 5 Series long wheelbase platform that is currently on sale in China.

The car will be built at the BMW-Brilliance plant in Shenyang in Northern China said BMW Chairman Norbert Reithofer.

“This model will be our e-car from China for China – a long version of the BMW 5 Series as a plug-in hybrid. This car will benefit from the strength and the excellent reputation of the BMW brand.” Reithofer said.

The 5 Series Plug-In Hybrid will likely use a version of the hybrid system first seen in the ActiveHybrid 5 Concept a year ago at the 2010 Geneva Auto Show. That show car used an updated version of the hybrid gasoline-electric drivetrain that powers the ActiveHybrid 7. At the time, BMW said the system would bundle a straight-6 gasoline engine with a 40kW electric motor and an eight-speed automatic transmission. It offered no specific timetable for production.