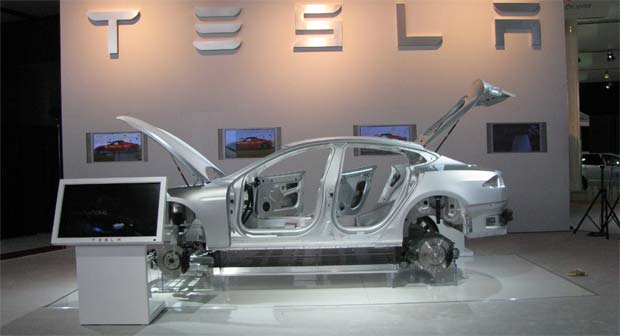 The Model S, engineered from the ground up as an EV, is meticulously designed for superior aerodynamics, stability and handling, crash safety, performance and range. The Model S expanded view on display details how Tesla engineers have created Model S to excel in all of these areas.

Tesla is recognized for its innovation in electric powertrain engineering and battery technology. Tesla design is known for its unique refusal to compromise beauty or efficiency. Today Tesla introduced its excellence in vehicle engineering.

Tesla assembled the brightest, most-promising automotive engineers to build the Model S. They took a fresh approach to their task, without the restrictions imposed by traditional combustion architecture. The result includes superior aerodynamics, remarkable torsional rigidity and an in-house extruded aluminum suspension system.

Tesla already has over 3,500 Model S reservations. The car will begin production in mid-2012 at the Tesla Factory in Fremont, CA.