Nissan LEAF electric car will have a window sticker of 99 miles per gallon in combined city and highway driving based on government testing, the automaker said Monday.

After completion of five-cycle testing, the EPA has rated the Nissan LEAF with an MPG equivalent of 106 mpg in city driving and 92 mpg on the highway for a combined 99 MPGe. 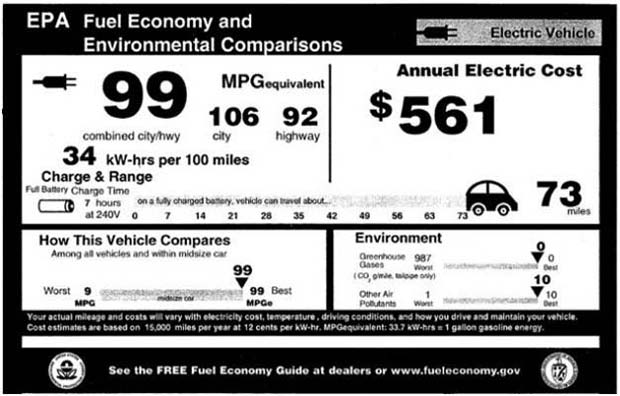 This calculation is based on the EPA’s formula of 33.7kW-hrs being equivalent to one gallon gasoline energy. In addition, the label displays a charging time of seven hours on a 240V charge and a driving range of 73 miles, based on the five-cycle tests using varying driving conditions and climate controls. Driving range on the Nissan LEAF, as with all vehicles, varies with real-world driving conditions.

The MPG equivalency (MPGe) rating was developed by the EPA as a way to provide a standard so consumers can compare vehicles across the spectrum and make an educated purchase.

The 2011 Nissan LEAF, which uses no gas, was also rated best-in-class for the environment based on emitting zero greenhouse gases or other traditional tailpipe emissions. The label, which will be part of the Nissan LEAF’s Monroney label, is now ready for placement on the vehicles in anticipation of the December launch.

Sales of the Nissan LEAF will begin in December in California, Oregon, Washington, Arizona and Tennessee. In January 2011, sales begin in Texas and Hawaii, with additional market roll-out continuing later in 2011.