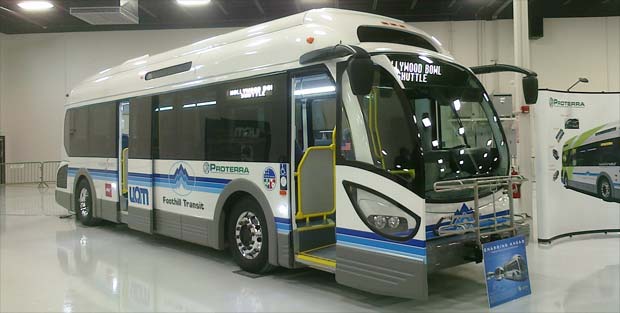 The EcoRide BE35 electric buses will serve Line 291 between La Verne and Pomona, on the east side of Los Angeles County.

The EcoRide BE35 electric bus can run up to three hours and can recharge its battery in less than 10 minutes.

The electric buses achieve between 18 and 29 miles per gallon (diesel-fuel equivalent) fully loaded with 68 passengers–a 500% improvement on comparable diesel buses. Proterra says that it is an improvement in fuel efficiency of 500 percent.

The  EcoRide BE35 electric bus is powered by a UQM PowerPhase 150 electric propulsion system that produces peak torque of 650 N-m and peak power of 150 kW (201 horsepower).