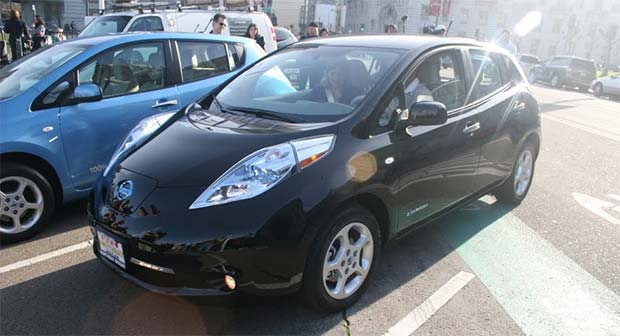 Nissan has invited nearly 500 people to drive its new Nissan LEAF electric car at the company’s Oppama test track in Japan over the next week.

Media, Nissan shareholders, government officials, analysts and some of the first customers to place reservations for Nissan LEAF will get the chance to experience the benefits of this practical, affordable and fun to drive all-electric car when they get behind the wheel of the first production test units.

Nissan LEAF is a ‘new car’ in every sense of the word and redefines the driving experience, setting new standards in handling, acceleration and comfort in its class. Nissan LEAF officially goes on sale beginning in December.

Among the enhancements to the test units is the “Approaching Vehicle Sound for Pedestrians” system, which also will be used in the Nissan Fuga hybrid, slated for sale in fall 2010.

After exploring a hundred sounds that ranged from chimes to motorlike to futuristic, the company settled on a soft whine that fluctuates in intensity with the car’s speed. When backing up, the car makes a clanging sound.

The sound system, first of its type to be introduced by an automaker, is a combination of a high and low-pitched hum for the Leaf to make at speeds below 30 km/hour to alert pedestrians of its approach.

The system is controlled through a computer and synthesizer in the dash panel, and the sound is delivered through a speaker in the engine compartment. A switch inside the vehicle can turn off sounds temporarily. The system automatically resets to “On” at the next ignition cycle.

Nissan LEAF will be on sale in Japan, the United States, Portugal and the Netherlands starting in December and in the United Kingdom and Ireland starting February 2011. Nissan plans to begin mass marketing Nissan LEAF in 2012.

Production will start in October at the Oppama plant in Japan. The second half of 2012 will see production at the Smyrna, Tenn., plant in the U.S., followed by production in the UK at the Sunderland plant in 2013.