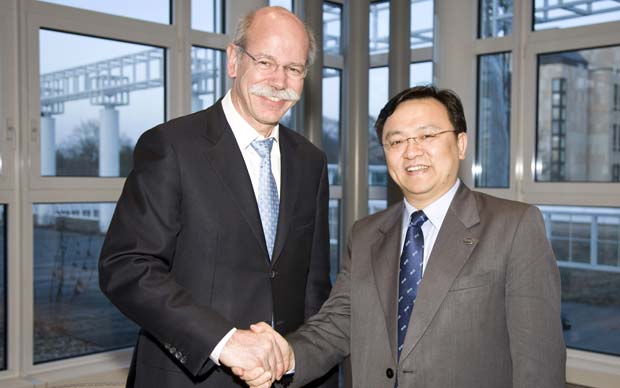 Daimler is to bring “know-how in car architecture and security” to the venture, while BYD will contribute “its competence in batteries and propulsion system for electric cars.

The two companies had signed a memorandum of understanding on the venture in March.

The Daimler executive said the new joint venture might display a prototype of the jointly-developed electric car as early as the Paris Auto Show in October.

Backed by Warren Buffett, BYD began mass production of the F3DM – world’s first plug-in hybrid car in 2008. Chinese company plans to start selling the E6 electric car in the U.S. this year and in Europe next year.

Daimler’s electric-car strategy includes large-scale production of an electric version of its Smart ForTwo starting in 2012. The company began assembling about 1,000 units of the urban two-seater in November 2009. Daimler will make lithium-ion automotive power packs in a joint venture set up in late 2008 with Evonik Industries AG, Germany’s largest specialty-chemicals maker.