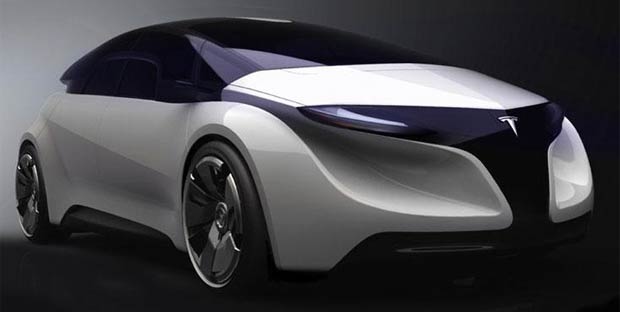 Tesla Motors has recently commissioned a group of eleven L ‘Istituto Europeo di Design (IED) of Turin students studying for their Master of Arts in Transportation Design, to come up with an EYE concept that would be introduced in Geneva next month.

The EYE concept car, produced in a full scale model version, was born out of the Institute’s desire to test the ability of its young designers and discover their vision of the future:  this led us to the choice of looking beyond traditional car manufacturers and join forces with a company which is synonymous with innovation Tesla is a company which produces 100% electric cars, whose green heart is perfectly in tune with its winning design, its sporting performance and the extremely pleasing driving experience its car offer.

EYE concept was born out of research into the identity promoted by Tesla to achieve a new objective:  designing an everyday  2 + 2 sports car conceived to become a status-symbol,  a car with engaging features and sports car performance ideally suited to a young, cosmopolitan target, particularly given its accessible price tag, and all those people who are constantly in touch with the world via the web and digital technologies.

EYE concept is the product of the work of eleven Master Course students, coordinated by Luca Borgogno, senior designer with Pininfarina and by Andrea Militello, Senior FIAT designer. The supervision of Franz von Holzhausen, Tesla Motors’ Chief Designer was fundamental to the entire process.

EYE was produced thanks to the collaboration of: Pirelli, OZ Racing.