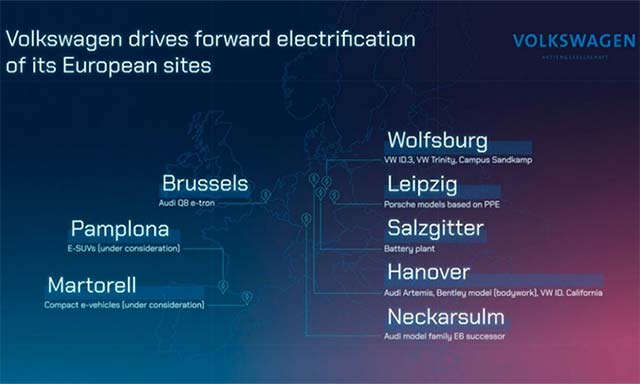 Within the framework of Planning Round 70, the Volkswagen Group today resolved to further electrify its European plants in pursuit of its goal of becoming global market leader in electric mobility by 2025. Thus, the Group vigorously drives forward the implementation of its NEW AUTO strategy.

The Group headquarters and manufacturing site in Wolfsburg will be transformed and the Group’s competitiveness boosted through higher spending on future technologies. The future-oriented investments, which will be primarily in e-mobility and digitalization, will account for the largest proportion of total investments of EUR 159 billion for the first time, at 56 percent or EUR 89 billion. Volkswagen expects that by 2026 one in four vehicles sold will have a battery-electric drive system.

Hans Dieter Pötsch, Chairman of the Supervisory Board of Volkswagen AG, said: “The resolutions passed today show how resolutely we are driving forward the transformation of the Volkswagen Group. Our investments will be focused on the future of mobility in all its key aspects and on systematically implementing the Group’s strategy. Our exceedingly robust and solid financial base, enables us to finance the necessary investments on our own. We are also therefore very confident that these investment decisions will steer the Volkswagen Group to future success.”

In comprehensively electrifying its European plants, the Volkswagen Group intends to generate additional synergies and take advantage of economies of scale.

The Group will invest around EUR 21 billion at its plants in Lower Saxony alone, most of which will be channeled into manufacturing sites and components facilities.

Stephan Weil, Minister President of the State of Lower Saxony and Supervisory Board member of Volkswagen AG, said: “89 billion euros over the next five years in future technologies such as electromobility and digitization alone – that is a clear commitment. This is how the NEW AUTO strategy can be a great success. The fact that 21 billion euros are being invested in the Lower Saxony sites in Wolfsburg, Hanover, Braunschweig, Salzgitter, Osnabrück and Emden is yet another sign that the global Volkswagen Group is committed to its Lower Saxony roots. We are pleased about this strong signal to safeguard around 130,000 jobs.”

The Group is also planning further investments in e-mobility in Germany and Europe:

Transformation of Wolfsburg – vision for 2030 agreed

Project Trinity has been confirmed for the Wolfsburg plant, and additional derivatives will be examined in the next planning round.

Daniela Cavallo, Chairwoman of the General and Group Works Council, said, “By adopting these resolutions in the planning round, our Group is proving once again that, for us, systematic transformation and sustainable prospects for safeguarding jobs go hand in hand. The results for our colleagues at our plants around the world, at the brands and companies will strengthen the course we are pursuing together. As the employee representatives in the Supervisory Board, we expressly assess the initiatives of the planning round as exactly the right plan in these extremely uncertain times: Volkswagen delivers – and we will continue to successfully shape change.”

In addition, the Board of Management outlined plans for a far-reaching reorganization of the plant by 2030.

Project Trinity, for which a factory outside the current plant site is being considered, is intended to create an innovative, competitive next-generation battery electric and Level 4-capable vehicle while positioning manufacturing for the future. There are plans to build a second cutting-edge electric manufacturing facility on the current factory premises by 2030. The site will be complemented by Europe’s most modern research and development center, the Sandkamp Campus.

CEO Herbert Diess: “In the NEW AUTO world, our business model is undergoing radical change – Volkswagen is being transformed from a traditional automotive manufacturer to a vertically integrated Group with strong brand groups and world-leading technology platforms. Wolfsburg, our Group’s long-established headquarters, will be central to the transformation, because we can only safeguard our strong position long term if Wolfsburg is successful. We will give the Wolfsburg site a new identity with our vision for 2030. Our goal is to create an internationally sustainable site with efficient Group steering, two electric manufacturing facilities, plus a state-of-the-art research and development center, and to establish and expand other future-oriented fields.”

Planning Round 70 will make the Group much more competitive

In updating its five-year planning, the Volkswagen Group also clearly defined the path to achieving its strategic financial targets as part of the NEW AUTO strategy. This will make the Group much more competitive.

The strategic target for 2025/2026 is an operating return on sales for the Group in the range of 8–9 percent. At the same time, capex and development costs will be trimmed to around 11 percent of revenue in the Automotive Division. Adjusted net cash flow for the Automotive Division (before M&A and diesel outflows) is expected to top EUR 15 billion per year in 2025/2026.

For this year, the Group has confirmed its operating margin target at the upper end of the range of 6–7.5 percent. Deliveries to customers will come in at around 9 million. The Group is reiterating that adjusted net cash flow for the Automotive Division of EUR 15 billion (before M&A and diesel outflows) is certain to be achieved. This year, good progress was made with the fixed cost program, so that by the end of September, fixed costs had been reduced by 8 percent compared with 2019. A 10 percent reduction by 2023 is being targeted.

The share of total expenditure that will be invested in future technologies through 2026 has now been raised to 56 percent from 50 percent in the previous planning. A total of around EUR 89 billion has been earmarked for e-mobility, hybridization and digitalization, EUR 16 billion more than in Planning Round 69. The additional investment requirement is mainly due to the accelerated ramp-up of e-mobility as part of the Green Deal as well as the establishment of own battery gigafactories and vertical integration in the battery value chain.

Capex and development costs for e-mobility were increased by around 50 percent in Planning Round 70 to EUR 52 billion. Conversely, the clear focus on an accelerated BEV ramp-up will enable spending on hybridization as an intermediate technology to be reduced by around 30 percent to EUR 8 billion. Overall, the share of BEV vehicles is expected to grow from around 5–6 percent at present to approximately 25 percent in 2026.

By 2030, nearly one-third of revenues in the global mobility market are expected to come from software-based services. To tap this potential, EUR 30 billion has been earmarked for the digitalization of products and the company, including autonomous driving, by 2026, an increase of around 10 percent on the previous planning.