Volkswagen ID.4 sets record for longest journey by EV in a single country 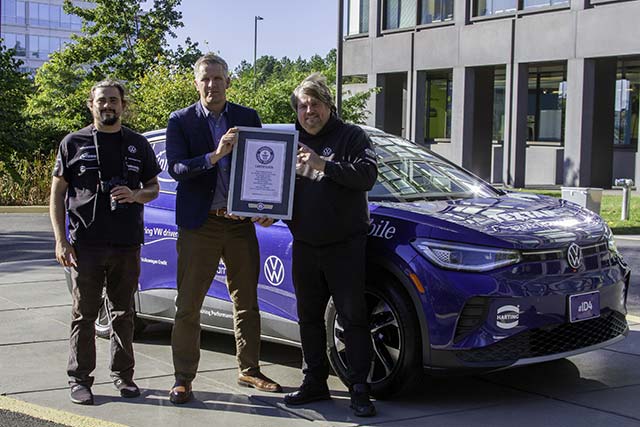 Upon their arrival at the last stop of the tour, Guinness World Records announced that the pair are awarded the title for the longest continuous journey by electric vehicle (non-solar) in a single country, bypassing the driven mileage set by the previous record by more than double. “It was great being able to share my experiences with the ID.4 with so many different people, including dealership staff, along the way,” said Zietlow. “Breaking the record is not only a testament to the reliability of the ID.4, but also to the actual readiness of the nation’s charging infrastructure.”

Almost 100 days ago, Zietlow and Collins took off from Herndon, VA with a mission to visit more than 600 Volkswagen dealers in the ID.4, Volkswagen’s first long-range EV for the U.S. market. Upon their return to Herndon, the adventurers amassed more than 35,000 miles and visited 628 Volkswagen dealerships across all 48 contiguous states.

“Congratulations to Rainer and Derek for setting a new world record,” said Hein Schafer, Senior Vice President of Product Marketing and Strategy, Volkswagen of America. “Their achievement is a significant recognition for the entire Volkswagen EV landscape and this tour provides further proof that the ID.4 is a very realistic and capable alternative to gasoline-powered vehicles as public EV charging stations become increasingly more available.”