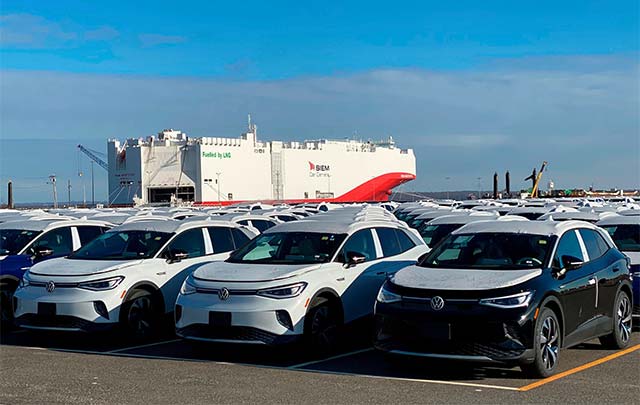 During a time when Corona was just a Mexican beer, 2019 full-year new pure electric BEV passenger car registrations totalled 354,000 which was the equivalent of 2.5 per cent of the 14.24 million new passenger car market across the 18 market region monitored by the monthly European Electric Car Flash Report exclusively each month.

However since 2019 a lot has changed, with tighter fleet average CO2 emissions targets being implemented from an average of 130g/km prior to 2020 to 95g/km being phased-in from 2020, it has caused manufacturers to unleash their electric cars to market.

This, along with pent-up demand, heavily contributed to new electric car registrations doubling within 12-months (2020 volumes over 2019 levels), with manufacturers opening up their electrified floodgates, in order to meet CO2 targets and avoid tough fines for non-compliance. 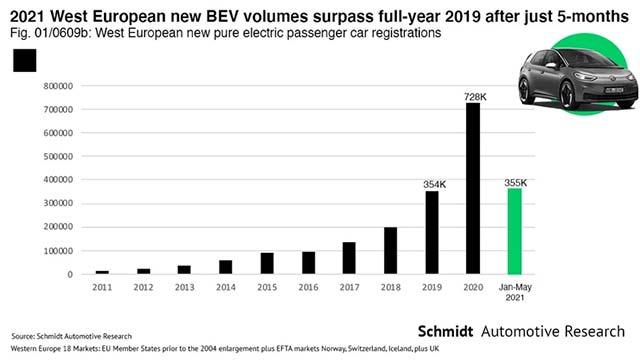 The resulting 728,000 new electric car volumes recorded in 2020 witnessed the BEV penetration almost tripling from 2.5 per cent in 2019 to 6.7 per cent at the close of last year. Significantly however, as the CO2 fleet average targets (fully-implemented from 2021) remain in place up to the end of 2024, the momentum that was built up last year in terms of penetrating the total market has stalled according to exclusively complied Schmidt Automotive Research data. The 12-month rolling cumulative share of new passenger car sales being fitted exclusively with an electric engine has only risen by one percentage point since the start of year, with the 12-month period up to the start of June 2021 seeing 7.7 per cent of all new passenger car registrations being a BEV.

Nonetheless the accumulated volume from the opening 5-months of 2021 – 355,000 – was enough to see it outnumber full-year 2019 volumes – 354,000 in a rebounding total market following last year’s corona implications.

Although momentum is expected to grow as the year progresses, with manufacturers having to increase their plug-in volumes this year over 2020 levels due to 100 per cent of the fleet being included in the CO2 average (last year only included 95 per cent of the fleet in a phase-in of the new regulation target) and the lack of super-credits, with most manufacturers using their full 7.5g/km allocation last year, early numbers suggest that PHEVs are doing their best to help make up the difference and take up the compliance slack. According to the next report published later this month (June), PHEV volumes outpaced BEVs across the 18 market region during every month this year.

Although BEV volumes are expected to increase as the year progresses, with Volkswagen Group expecting a large increase in global BEV volumes in the second half of the year as it introduces new models and recovers from weak first quarter inventory levels following a strong end of 2020 – to avoid a large fine for non-CO2 compliance – in a recovering total market, the BEV penetration growth is expected to be slow to steady.