Every fifth car manufactured in Germany is now a plug-in 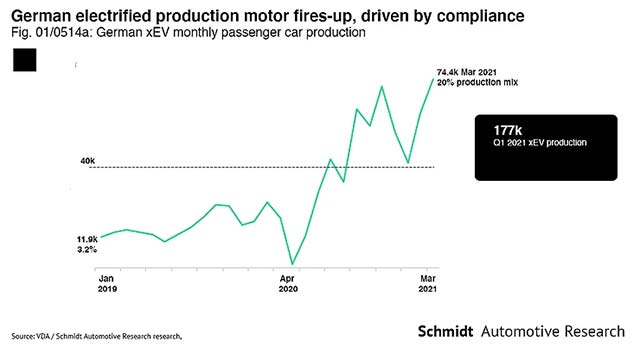 With Germany being the powerhouse of the European motor industry, manufacturing every third car in the region, or twice the volume of the next largest market, Spain, latest VDA data and Schmidt Automotive research can reveal that for the first time one-fifth of those German manufactured cars came fitted with a plug.

During March, 74,000 of the 373,900 passenger cars manufactured were xEVs, meaning they were capable of recharging using an external cable.

The proportion of combined BEV (battery electric vehicles) and PHEVs (plug-in hybrid vehicles) remained in a mix corridor of total production of between 15-20 per cent for the fifth consecutive month, whilst recording the highest xEV volumes on record in March itself.

The first quarter combined total (176,600) was down on the final quarter of last year (181,400) due to seasonal effects related to the Christmas holiday shutdown period, among other reasons.

With Tesla volumes now expected to be added to the equation by the end of the year and Volkswagen increasing production at its all-electric multi-brand Zwicaku production plant as the year progresses the European Electric Car Flash Report, published by Schmidt Automotive Research each month, expects the 2021 volume to just fall short of 1 million units.

Last year 428,000 xEVs were manufactured in Germany according to VDA data.