UK: new car registrations up as showrooms look to reopen 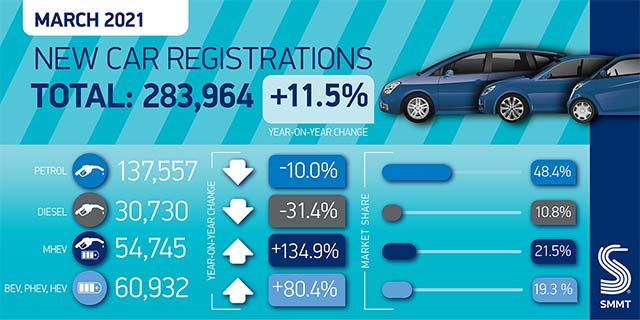 UK new car registrations have grown for the first time since August 2020, with 29,280 more units registered during March compared to the same month last year, according to figures published today by the Society of Motor Manufacturers and Traders (SMMT).

According to SMMT, around 8,300 registrations a day are needed for a return to average pre-pandemic levels by the end of the year. By comparison, the industry has averaged around 7,400 a day during the past decade and current levels are closer to 5,600 a day.

While overall registrations were slightly up compared to last year, growth came almost entirely from fleets, which saw a 28.7% increase in registrations. Retail consumer demand remained depressed, falling by -4.1% compared to March 2020 as showrooms remained closed for the duration of the month.

The shift to new technologies is continuing, however, with plug-in vehicle demand reaching its highest ever volume. Battery electric vehicles (BEVs) and plug-in hybrid vehicles (PHEVs) took a combined market share of 13.9%, up from 7.3% last year as the number of models available to customers increased from 72 to 116. Registrations of BEVs increased by 88.2% to 22,003 units, while PHEVs rose by 152.2% to 17,330. Hybrid Electric Vehicles (HEVs) also rose 42.0% to reach 21,599 registrations. 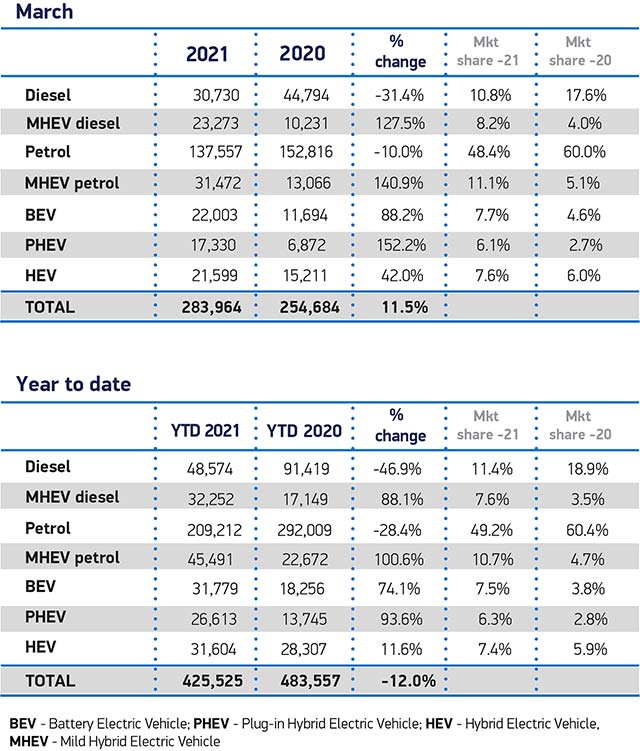 Mike Hawes, SMMT Chief Executive, said: “The past year has been the toughest in modern history and the automotive sector has, like many others, been hit hard. However, with showrooms opening in less than a week, there is optimism that consumer confidence – and hence the market – will return. We know we will see record breaking growth next month given April 2020 was a washout, but a strong, sustainable market is possible if customers respond to the choice and competitive offers the industry provides within the safest of showroom environments.

New plug-in models are already helping drive a recovery but to convince more retail consumers to make the switch, they must be assured these new technologies will be convenient for their driving needs and that means, above all, that the charging infrastructure is there where they need it, and when they need it.”