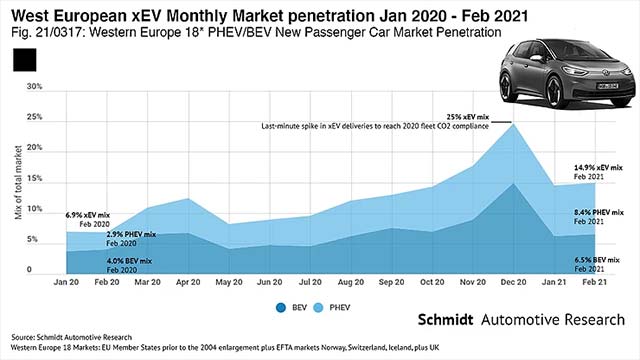 PHEVs continued to play the leading role in Western Europe’s plug-in car market during the opening two months of the year, despite BEVs accounting for most of the headlines, according to exclusive Schmidt Automotive Research monthly data.

With 224,000 plug-in electric passenger cars newly registered across the 18 market West European region during the opening 2-months of 2021, according to the next edition of the European Electric Car Report the market increased by 61 per cent over the same period last year, which was yet to suffer the consequences of the European COVID-19 shutdown.

However, the main driver didn’t come from pure electric BEV vehicles, which saw a 23.7 per cent increase – and a 27.8 per cent increase in February alone – but came from PHEVs. Plug-in hybrids saw volumes in the opening two months of the year outpace pure electric BEVs by 33,300 units accounting for 57 per cent (128,500 units) of all the plug-in volumes, more than doubling over the same period last year (62,000), compared with BEVs witnessing under 100,000 units during the same period.

Meanwhile, according to the latest report, to be published next week, the 12-month rolling xEV (PHEV/BEV) volume across the region rose to 1.42 million units in the period from March 2020 to February 2021.

BEVs accounted for just under 750,000 units and PHEVs 670,000 units. According to the report’s forecast, the region is likely to finish 2021 with just under 2 million new xEV plug-ins entering the roads this year compared with 1.33 million last year.

As is the nature with the European market, every final month of a quarter benefits from a large boost from Tesla delivers, due to the shipping schedule of the Californian manufacturer, which will likely contribute to a BEV bounce in March, and consequently getting closer to BEV/PHEV parity by the end of the first quarter once again.

An additional potential hiccup to BEV volumes in the opening two months came from the Volkswagen Group stables.

A possibility is that they may have held MEB-based volumes back until a software issue has finally been resolved, although a company spokesperson didn’t want to give any further comment, saying they are happy with their BEV order-intake when questioned by this report.