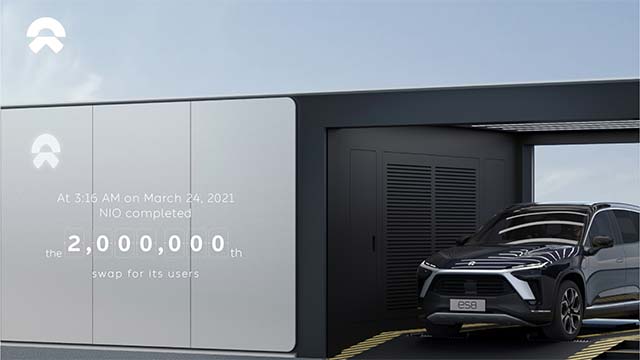 NIO says that the Power Swap stations have been the most welcomed power solution by its users, powering over 396 million kilometers of driving distance.

NIO’s most frequent Power Swap user has completed over 654 swaps, while the most traveled Power Swap user has visited 67 stations nationwide. Harbin, Beijing, Chengdu, Haikou, and Shenzhen are the top five cities in China with the highest per capita swaps.

As an integral part of NIO’s Battery as a Service (BaaS) solution with chargeable, swappable, and upgradable batteries, apart from serving as the time-efficient solution for users’ daily needs, Power Swap also allows users to upgrade the battery and continuously enjoy the progress of battery technology.

NIO intends to deploy its new NIO Power Swap 2.0 station by mid-April. Announced at NIO Day 2020 in Chengdu in January, the Power Swap Station 2.0 will be capable of 312 swaps per day—three times more than the current swap station.

At the new Power Swap station, the vehicle can automatically drive into the station, and users can start a self-service swap with one tap on the center display and without getting out of the vehicle. NIO will speed up the Power Swap stations’ deployment and plan to have 500 stations in operation nationwide by the end of 2021.