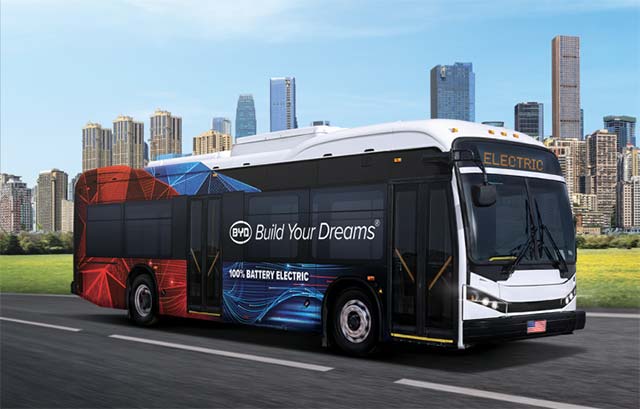 The K8M record-setting performance included high marks in structural durability, reliability, maintainability, and safety. As a result, U.S. transit agencies can confidently use FTA funding to buy the K8M.

“We set a new benchmark and record for the entire American electric bus industry,” said Patrick Duan, BYD North America Senior Vice President. “The Altoona test results prove the K8M will give our customers the best reliability and lowest maintenance costs they deserve and demand. I’m very proud of our team, and I’m extremely happy that our customers will benefit when they deploy the top bus in its class.”

The innovative K8M, a state-of-the-art transit bus, is 35-foot in length and can seat up to 33 passengers. The K8M electric bus is equipped with up to 435kWh LFP battery and can be fully charged within 3 hours.

BYD is the first battery-electric bus manufacturer that has both a unionized workforce and a Community Benefits Agreement, which sets goals for hiring veterans, single parents, second-chance citizens, and others facing hurdles in obtaining manufacturing employment. In addition, in partnership with SMART Local 105 and Antelope Valley College, BYD set up an apprenticeship program, improving production quality and efficiency and giving employees valuable skills that will benefit them for a lifetime.

BYD offers the widest range of battery-electric bus and coach models in the United States, ranging from 23-foot motor coaches on up to the 60-foot K11M and 45-foot double-decker C10MS.

When it comes to zero-emission transportation, BYD brings innovation and cutting-edge technologies to forward-thinking communities and private enterprises.