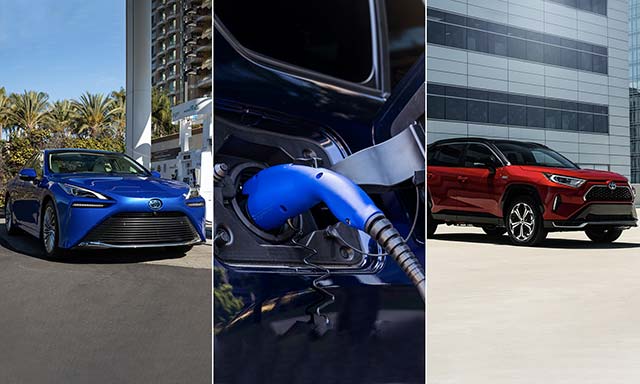 Toyota has revealed plans to introduce three new electrified vehicles in the United States this year, including two EVs and a plug-in hybrid.

“We continue to be leaders in electrification that began with our pioneering introduction of the Prius nearly 25 years ago,” said Bob Carter, TMNA executive vice president of sales. “Toyota’s new electrified product offerings will give customers multiple choices of powertrain that best suits their needs.”

Toyota’s leadership in alternative powertrain vehicles in the United States is being bolstered by the recent electrified models. Toyota holds more than 40% of the overall alternative fuel vehicle market, including a 75% share of the fuel cell market and a 64% share of hybrids and plug-ins.

Toyota’s target is for electrified vehicles to account for 40% of new vehicle sales by 2025, with that number expected to rise to nearly 70% by 2030.

Toyota hybrid vehicles have prevented an estimated 139 million tons of greenhouse gas (GHG) from entering the atmosphere around the world. In the U.S., the company have avoided approximately 38 million tons of GHG. This achievement is the result of Toyota’s long-standing commitment to the environment and creating a net positive impact on the planet and society.

Between now and 2025, Toyota and Lexus models, globally, will have an electrified option. Toyota is also developing a dedicated BEV platform, e-TNGA, that offers flexibility for all drive configurations. These initiatives are further steps toward achieving the Toyota Environmental Challenge 2050, introduced in 2015, the most demanding and most inspiring environmental commitments Toyota has ever made.

“We believe the fastest way to lower greenhouse gases in the transportation sector is to offer drivers lower carbon choices that meet their needs,” said Gill Pratt, chief scientist of Toyota Motor Corporation and CEO of Toyota Research Institute. “At every price point and with multiple powertrains, we can put more people in cleaner automobiles across North America to have the greatest near-term impact on total carbon emissions.”

Toyota shared highlights of new internal research evaluating the environmental impact and cost of ownership between a PHEV and a BEV. For this research, Toyota created a tool that shows the trade-off between GHG Emissions and Total Cost of Ownership. The source code for this tool is publicly available at carghg.org for others to experiment with the various input parameters and see the movement of BEVs and PHEVs on the GHG and cost plot. The research found:

– GHG of a currently available BEV model and PHEV model are roughly the same in on-road performance when factoring in pollutants created by electricity production for the average U.S. energy grid used to charge batteries.

– Manufacturing is a component of GHG emissions. Using the “Greenhouse gases, Regulated Emissions, and Energy use in Technologies” (GREET) model, researchers found that the production of a PHEV emits less GHG since it uses a smaller, lighter weight battery.

The key point is that a BEV and PHEV can provide similar environmental benefits. Each has a unique profile and can be an optimal solution in different circumstances. By having a diversified product portfolio with multiple forms of vehicle electrification, Toyota can let consumers choose the model that best suits their usage needs and cost profile while maximizing the total contribution to GHG reduction.

– Reduction in CO2 from the company’s operations, products and vehicle lifecycle – including logistics, suppliers and dealers
– Reduction in overall water use per unit of vehicle production by 3% from a 2020 baseline
– Reduction of procurement of plastic packaging materials by 25% from a 2018 baseline
– Development of third party validated onsite habitat management policy by 2021 and begin implementation in 2022.

As proof of its commitment, Toyota recently agreed to purchase power from a future Clearway Energy Group wind farm to reduce its overall carbon footprint from electricity used from the power grid. Toyota also provided an annual update toward having a net positive environmental impact in the 2020 North American Environmental Report.