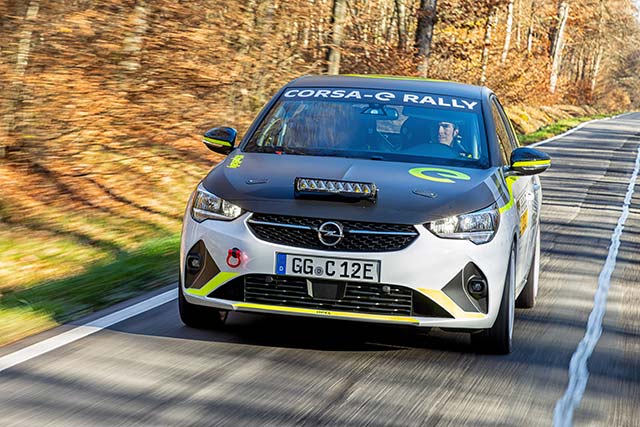 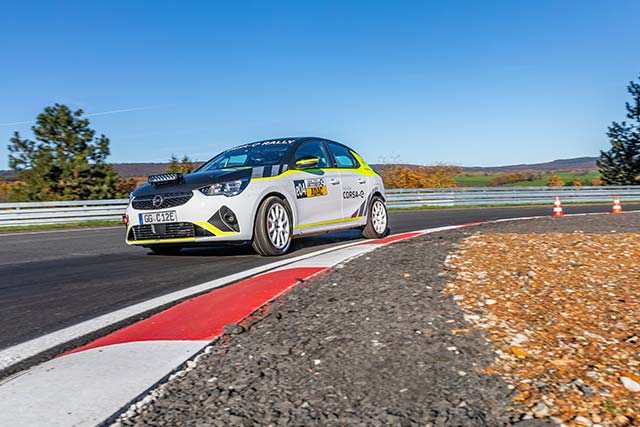 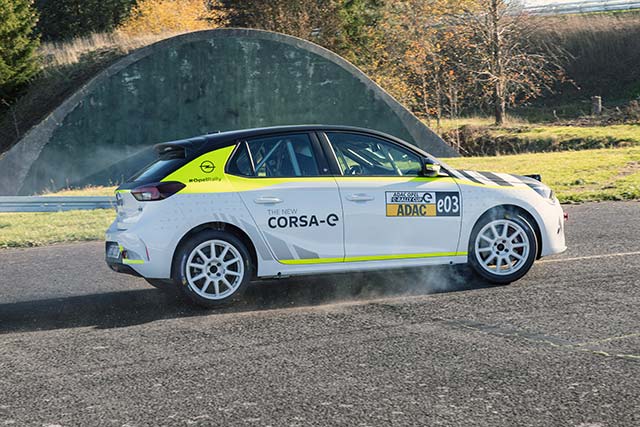 The very first purely electric rally car from a manufacturer is ready to go for the next season: the Opel Corsa-e Rally has already clocked thousands of kilometres in testing. It recently passed its maturity test during a small-scale rally simulation of the German Rally Championship.

Opel driver Marijan Griebel fastens the six-point seat belt and checks his equipment one more time. Navigator Tobias Braun sets the trip master to zero, which measures the distance covered, and focuses his gaze on the track.

A timer faces the Opel Corsa-e Rally and is counting down the seconds until start using hand gestures. When the count hits three, Griebel applies the hydraulic fly-off handbrake whilst revving the motor a little to preload the electric drive system.

At zero, the timer’s hand disappears, Griebel lets go of the brakes and the Corsa-e sprints out of the blocks like a bat out of hell. The co-driver immediately starts rattling off his pacenotes: “50 Left Five full, into Right Four minus, narrows, 20 Chicane Right, 40 Right Five full cut …” The 136-hp electric Corsa throws itself into the corners vigorously and accelerates quickly from a standing position thanks to its high torque of 260 Nm. The Torsen limited-slip differential ensures the best traction, especially when coming out of the bends. The rally car slams through the stages unphased, steering precisely and braking smoothly.

This is exactly how Opel factory driver Marijan Griebel has started hundreds of special stages in the past. For example, in special stage 13 of the Rally Liepāja in 2016. After 23.05 kilometres of driving at the absolute limit through the final stage – all without making a single mistake – and covering more than 200 kilometres during the entire rally, they had finally done it: the policeman from Hahnweiler won the final rally of the season in Latvia with his Opel ADAM R2 and took home the title in the FIA ERC Junior as the first German European rally champion in 15 years.

Now, in 2020, Griebel is the first person in the world to sit in a purely electric rally one-make cup vehicle. It was developed for the ADAC Opel e-Rally Cup and will make its debut in the 2021 season.

Opel is once again participating in the customer sport with the new one-make cup and is looking to combine this with the success of the ADAC Opel Rally Cup, in which a total of 131 drivers from 18 countries have taken part since 2013. Before that can happen, the Opel Corsa-e Rally still has a number of test drives left to get through, for which the Opel Motorsport team has planned three days at the Test Centre in Pferdsfeld. Here in Rhineland Palatinate, the electric race car is being prepared to take part in the German Rally Championship.

Over three days, four Corsa-e Rallys will be driving on the handling track in the vast testing area in Bad Kreuznach to simulate a rally. All under real conditions.

Griebel and his team get an early start. 8:05 am: Parc fermé OUT. 8:08 am: Service IN. 8:23 am: Service OUT. This is followed by a 9.6-km road section outside of the Test Centre, that is, right in the middle of rush-hour traffic, and in accordance with German traffic regulations, of course. Every rally car, including the ones that are used to compete at World Championship level, is approved for road use.

The goal: push it to the limit, test it, improve it

Confused looks stare out from the other cars. It’s not every day that you see a rally with an Opel Motorsport outfit. Arrive back at the Test Centre on time, timekeeping at 8:44 am, helmet on, final check, start stage 1 at 8:49 am, distance: 20 laps of 1.6 km, go!

The special stages are supposed to really push the Corsa-e Rally and test what still needs to be improved, to see where its limits are, and whether the powertrain can handle the stress on it. It is important to find out how the basic calibration system should be designed for customers, how mileages and charging times can be reconciled with a rally schedule and how the electric motor and battery unit’s temperature management works.

Back at the service point, the Opel engineers waste no time getting to work on the Corsa-e Rally: the laptop is plugged in, the data is read, the tyres and brakes are checked and temperatures are measured. Even in the digital era, feedback from the driver is still one of the most important aspects in the development of a rally car. How was it? What was it different this time? How did the vehicle work under X driving conditions, under Y driving conditions? Comments, complaints, suggestions?

The main focus of this special stage was on the braking effect and whether the brakes felt right. Driver Griebel is looking for a more direct brake response and better pedal feedback during maximum deceleration. The Opel technicians, therefore, opt for harder brake pads. Time for the next stage. The same course, another 20 laps. The car enters the track and this time the European champion is beaming, giving a thumbs up – everything is good and running perfectly. Another service, this time to charge the battery – in just 30 minutes, the battery is already at 80 per cent. The perfect time for a sandwich and coffee break.

The new Corsa-e Rally is on the home stretch of the three-day-long test: the chassis fits, the steering and brakes are now perfectly tuned and all the important switches, levers and safety features have been integrated. It’s now time to fine tune the software. Everything has to be meticulously adapted to every situation; adjustments in one area will affect other ones. This requires extreme patience from engineers and test drivers.

A good example is mapping the accelerator. With his particularly sensitive right foot, the rally driver is looking for a direct response to get the best dose of motor power. In this regard, the Corsa-e Rally is still a little too reactive. The pedal implements driving commands a tad too progressively. Griebel is looking for a linear response, which means the control system will continue to be programmed until the European champion gives the thumps up once more.

After three intense days, the four electric Really cars clocked nearly 1,500 test kilometres without a problem in sight. The crew and the drivers are exhausted but also very happy with their work. Griebel takes stock of the results of the rally simulation: “The test was a success. Our customers will be getting a sophisticated, innovative one-make cup vehicle with outstanding performance and easy handling. The Corsa-e Rally is ready to rally!”