Mercedes-Benz EQC gets going on a faster charge 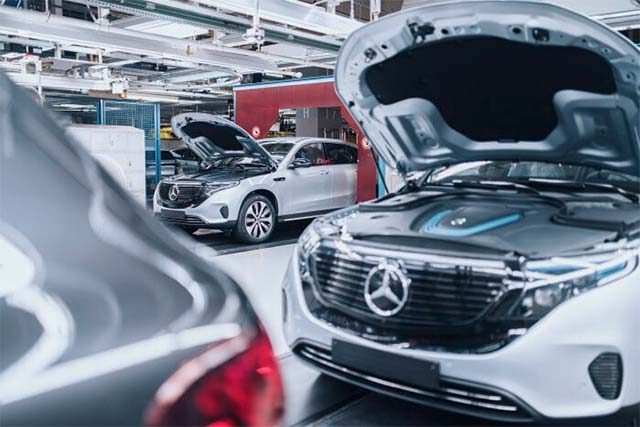 Mercedes-Benz is upgrading the technical specification of the EQC 400 4MATIC as standard now: with immediate effect the model boasts an ex-factory water-cooled on-board charger (OBC) with an output of 11 kW. This significantly shortens the time for alternating current (AC) charging. The global Mercedes-Benz production network at sites in Germany and China has reacted to the increasing demand for the appropriate battery systems: capacities have been increased step by step since the start of production.

With the EQC 400 4MATIC, Mercedes-Benz put the first vehicle of the Mercedes-Benz EQ brand on the road, as the pioneer and milestone of the Ambition 2039 strategy. With a more powerful on-board charger with 11 kW, the EQC is now receiving a technological upgrade and can thus be charged at home much more quickly at the Wallbox and at public charging stations with alternating current. This means that the 80 kWh battery can be charged in 7 hours 30 minutes from 10 to 100 percent SoC (state of charge), whereas it has previously taken 11 hours with a 7.4 kW charging capacity.

It is of course even faster at direct current (DC) charging stations. Via Mercedes me Charge customers can conveniently use what is currently the world’s biggest charging network without any worries. This network currently has more than 350,000 AC and DC charging points in 26 countries. With just a single registration, customers receive convenient access to charging stations from a multitude of suppliers, even across national borders. In the vehicle or via the Mercedes me App the customers receive the relevant price information from the suppliers even before the charging process.

The EQC was the first all-electric vehicle to be integrated into ongoing production at the Mercedes-Benz Bremen plant in May 2019. It is produced there on the same line as the C-Class Saloon and Estate as well as the GLC and GLC Coupé. The batteries for the EQC in Bremen are produced by the fully owned Mercedes‑Benz subsidiary Accumotive at the Kamenz site (near Dresden). In China for China – the EQC and the corresponding battery systems are also produced in Beijing as of the end of 2019 as part of the Beijing Benz Automotive Co. Ltd joint venture (BBAC). Capacities of the sites have been increased step by step since the start of production.

The growing range of models from Mercedes-Benz with an externally chargeable battery (xEV) is very well received by customers: both the demand and the orders received are constantly increasing. A total of 45,000 electric vehicles and plug-in-hybrids were delivered worldwide by the company in the third quarter of 2020, including around 2500 EQC in September. The global product portfolio of Mercedes-Benz now encompasses five all-electric models and more than 20 model variants as plug-in hybrids.