Mercedes-Benz EQC and GLC F-CELL: on the road to series production 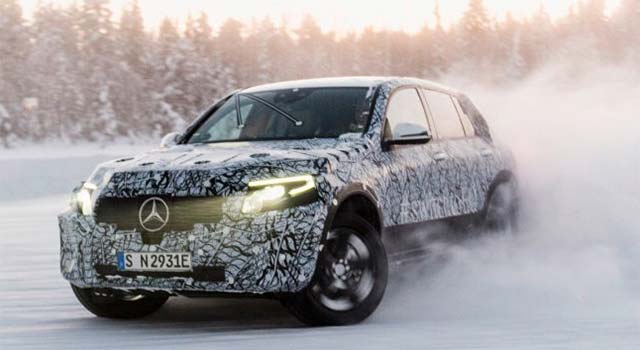 Mercedes-Benz is launching its electric offensive. At the 2017 Frankfurt Motor Show, the company presented a milestone on the road to emission-free driving in the shape of the pre-production versions of the GLC F-CELL – the world’s first electric vehicle to combine a fuel-cell and a plug-in battery in the powertrain.

2019 will see the market launch of the EQC – the first fully battery-electric Mercedes-Benz production model from the new product and technology brand EQ.

On the road to series production, prototypes have now successfully completed winter testing in northern Sweden.

Before a new Mercedes-Benz model goes into production, it needs to pass a series of tough and thorough tests: in addition to the winter testing in northern Sweden, there are of course summer tests in southern Europe and the USA as well as worldwide endurance road tests.

The company has been testing each new model under extreme conditions near the Arctic Circle for decades – in icy temperatures down to minus 35 degrees Celsius, on snow-covered roads, and on sheer ice on frozen lakes. To this end, Mercedes-Benz has set up a test centre in the small northern Swedish town of Arjeplog in Lapland. In addition to the road testing in the far north, tests take place there on specially set-up testing tracks. Demanding hill climbs with gradients of up to 20 percent, testing tracks with varying coefficients of friction, handling courses, and skid pads on the almost sheer ice of the frozen lake pose the stiffest of challenges for the powertrain and control systems.

For a new Mercedes-Benz model, validation of the entire vehicle includes a programme of over 500 individual tests. In the case of electric vehicles, the standard procedure is supplemented by numerous powertrain-specific tests developed specifically for the new powertrain technologies. New challenges for an electric vehicle include the output of the electric motor during cold starting and with a cold battery, the cold-starting properties of a fuel cell (stack), the vehicle’s range under the customer’s normal operating conditions, handling of charging cables, pre-entry climate control, and the operating strategy complete with recuperation. Added to this is the specific tuning of the vehicle dynamics and the ESP® system.

To enable testing of different customer requirements and battery-charging profiles, the test centre in Arjeplog offers the full range of charging options: from simple domestic mains outlets to wall boxes to quick-charging stations. There is also a good supply of hydrogen, of course.

Mr Kelz, you have already had the opportunity to drive a pre-production EQC. In a nutshell, what were your impressions of the drive?

Kelz: On the one hand, it’s dynamic and powerful; on the other hand, it’s a quiet glider. It’s a new and at first unusual combination, even for us developers. The pre-production EQC offers a very safe driving feel and is also so much fun that it leaves a permanent smile on its driver’s face.

Mercedes-Benz certainly has plenty of experience with battery-electric vehicles. Were you able to build on this?

Kelz: It goes without saying that all our many years of experience with electric cars went into the new EQC. But it also contains a wealth of innovations – the EQC is a milestone for us in terms of development.

Which innovations and new developments do you mean exactly?

Kelz: The EQC is an absolute highlight when it comes to power, sportiness and utility value. Likewise, the driving feel is sure to thrill our customers – not least thanks to the all-wheel drive, which we can incidentally tune particularly effectively here in Sweden on the frozen lakes. Then there are innovative solutions in areas such as telematics, connectivity and charging. The EQC really does herald the beginning of a new era in electric mobility at Mercedes-Benz.

What else did the winter testing in the far north involve?

Kelz: In addition to vehicle dynamics on snow and ice, winter testing of an electric car naturally also focuses on how well the battery system and the powertrain perform in sub-zero temperatures. Not to mention efficiency and comfort aspects, of course, such as the climate control, which are so decisive in terms of the vehicle’s range. Our most important learning experiences in Sweden are based on the fact that we can keep on encountering unexpected situations and gain valuable insights – something which it is not possible to achieve using currently available simulation technology.

What are the next steps in the development of the EQC?

Kelz: We are already a long way along the road: mechanically, the car is already in an excellent place, so we are now concentrating on fine-tuning prior to the vehicle launch.