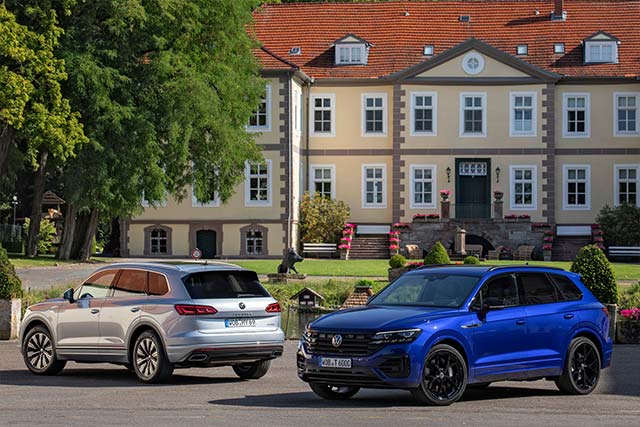 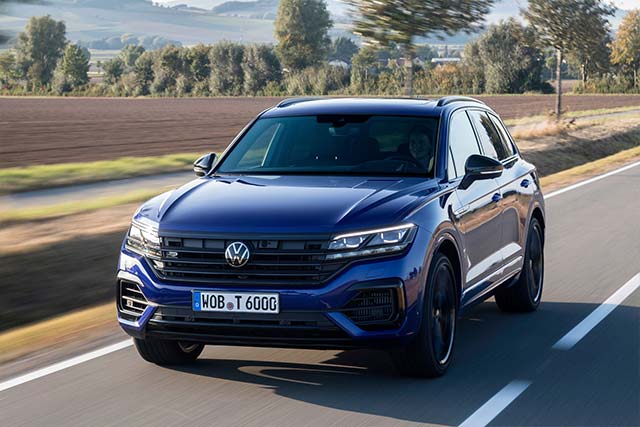 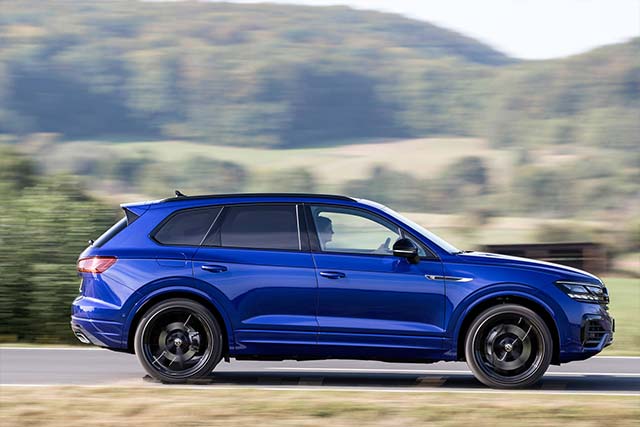 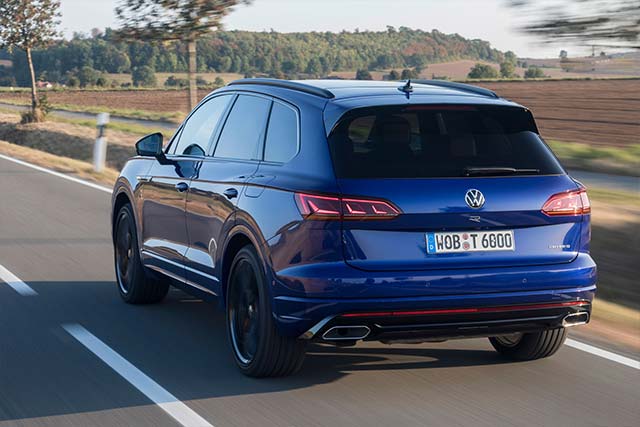 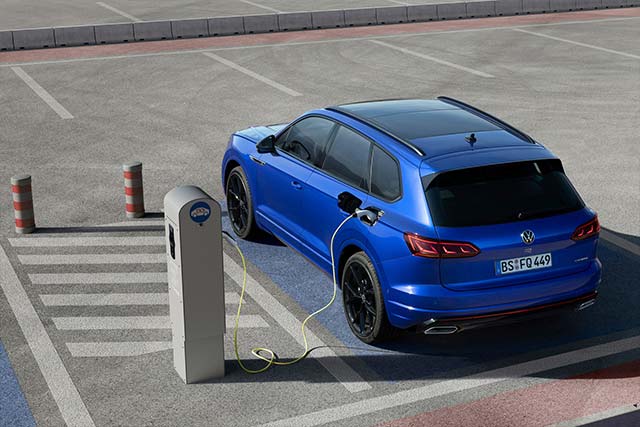 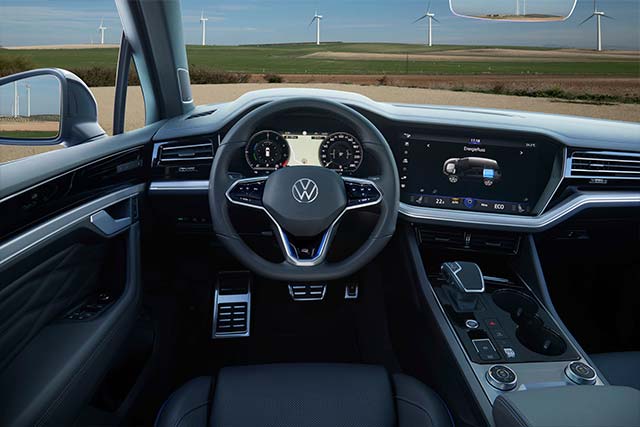 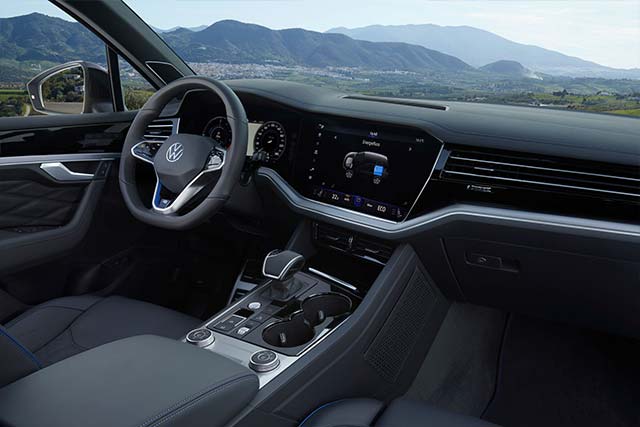 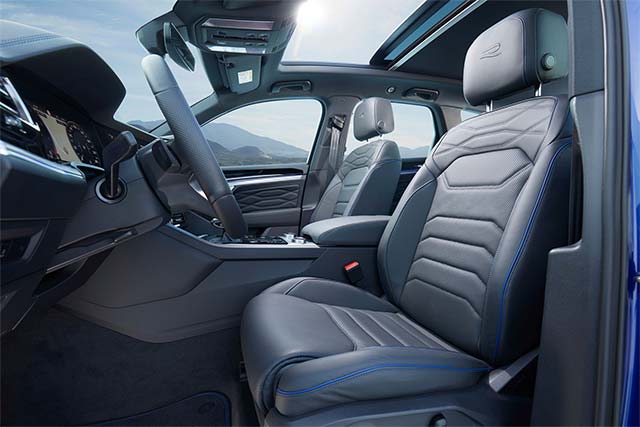 Volkswagen is ramping up its electrified offensive. The Touareg is now also available to order in two different plug-in hybrid versions. Both variants are characterised by an electric range of up to 47 kilometres (WLTP) and low average consumptions. The SUV range with electric motor and petrol engine starts with the new Touareg eHybrid with system power of 280 kW (381 PS). This version is designed for a high level of travel comfort and can be configured in the two equipment lines Atmosphere and Elegance. Price in Germany: from 72,378 euros.

Those who prefer a much sportier setup and sporty equipment to match will choose the Touareg R. With system power of 340 kW (462 PS), it is the most powerful model in the product line and of the brand. The Touareg R is available in Germany from 84,660 euros.

The two all-wheel-driven plug-in hybrid SUVs both feature a high level of efficiency, the familiar good all-round characteristics of the Touareg, and significantly enhanced standard equipment. This includes a 4-zone automatic air conditioner, the Innovision Cockpit with digital instruments, the Discover Premium top navigation system and a panoramic sliding/tilting roof. The Touareg R is also equipped as standard with the interactive IQ.LIGHT – LED matrix headlights.

The Touareg eHybrid and Touareg R have a long electric WLTP range of around 47 kilometres and low average consumptions. These characteristics can be attributed to the perfect interplay between the electric motor and the V6 turbocharged petrol engine. The plug-in hybrid models are ideal for the typical usage patterns of car drivers. In Germany, for example, the Federal Ministry of Transport and Digital Infrastructure (BMVI) found that 99 percent of all trips in the most populous country of Europe are shorter than 100 kilometres. For these distances, the plug-in hybrid drive with a charged battery (energy content: 14.3 kWh net, 17.9 kWh gross) stands out with particularly low fuel and energy consumption: 2.6 l/100 km and 24.2 kWh/100 km (Touareg eHybrid) and 2.7 l/100 km and 24.4 kWh/100 km (Touareg R) – WLTP values in each case.

The plug-in hybrid drives of both Touareg models also show off their great potential on long journeys because the battery is continuously recharged a little while driving via brake energy recuperation – in other words by recovering energy while braking. This energy is sufficient for the Touareg eHybrid and Touareg R to repeatedly completely switch off the V6 engine when decelerating and on downhill stretches, so that they coast with zero local emissions. The interplay of electric drive motor and six-cylinder engine is perfected with the predictive hybrid strategy of the models. Both Touareg models use GPS and the map data of the navigation system to also achieve extremely economical consumption values on medium and long distances. For this, the SUVs integrate the route data in the hybrid control. The Touareg eHybrid and Touareg R thus permit combined ranges of up to 810kilometres.

In spite of their outstanding efficiency, the new plug-in hybrid models are still specialists for demanding tasks – like all Touareg models. Both the Touareg eHybrid and Touareg R are designed for a maximum trailer weight of 3.5 tonnes, which is exceptionally high for hybrid models (also possible for all-electric driving). With this versatility – covering the spectrum from true off-road vehicle through to luxury-class touring car that can be used temporarily as a zero emission vehicle – the new Touareg plug-in hybrid models have a special place among large SUVs.

The Touareg is one of the world’s most modern vehicles in its class. With Travel Assist, for example, it is the first Volkswagen that is capable of assisted driving up to a speed 250 km/h within the system limits. The Touareg does not just react to vehicles driving ahead, but also to speed restrictions and the course of the road (bends, roundabouts, junctions etc.). In addition, the Touareg is also the first Volkswagen that can be automatically driven in and out of a parking space with the new Park Assist with remote control using a smartphone app. This is a particularly attractive feature for the new Touareg eHybrid and Touareg R because Park Assist with remote control works not only with the V6 petrol engine, but also in the all-electric E-MODE. The same applies to the familiar Trailer Assist function, which makes reversing with a trailer significantly easier.