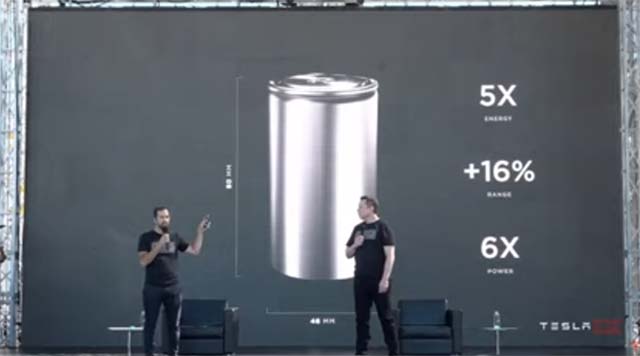 At a live presentation named ‘Battery Day’, Tesla CEO Elon Musk has announced technology that he says will make Tesla batteries cheaper and more powerful, which would set the stage for the company to make a “compelling” $25,000 electric vehicle three years from now

The main announcement was Tesla’s new larger cylindrical cells. Tesla plans to manufacture its own “tabless” batteries, which will improve its vehicles’ range and power. The new batteries will be produced in-house, which Musk says will reduce costs and bring the sale price of Tesla electric cars closer to gasoline-powered cars. It’s expected to lower Tesla’s cost per kilowatt hour, a key metric used to measure electric vehicles’ battery packs.

Tesla’s approach includes integrating the battery so that it forms part of the structure of the vehicle, thereby reducing the effective weight of the battery.

Musk also promised a $25,000 Tesla electric car that would be capable of driving fully autonomously and would be available in about three years.

Musk also announced that Tesla is taking orders now for the new three-motor Tesla Model S with “Plaid Mode,” a version capable of producing 1,100 horsepower. This car will be able to go from zero to 60 miles an hour in under two seconds and run a quarter-mile drag strip in under nine seconds. Costing about $140,000, the Model S Plaid will have a top speed of 200 miles an hour and will be able to go 520 miles on a full charge, according to Tesla.

Customers can order the Model S Plaid now and the first ones will be delivered by the end of next year.

The only thing beyond Ludicrous is Plaid