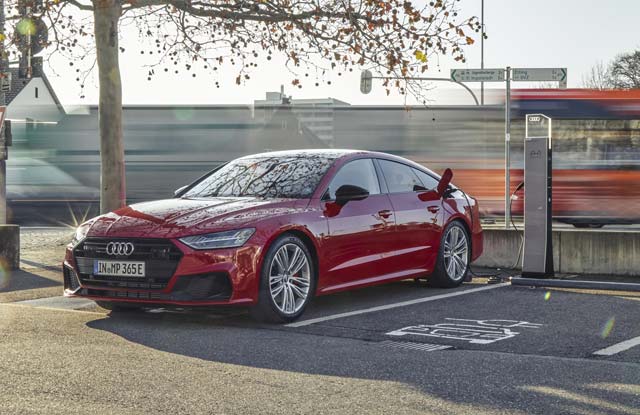 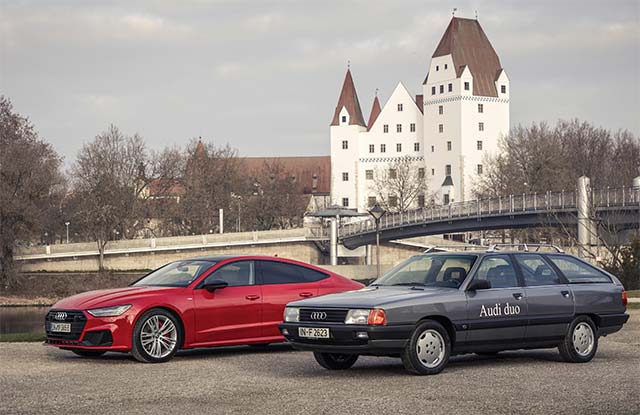 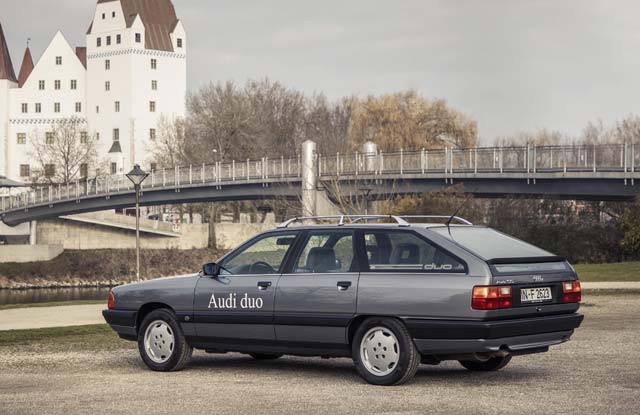 As Audi prepares to launch a range of new plug-in hybrid electric models in the UK, we take a look back at the company’s first hybrid model, the 100 Avant quattro Duo of 1989.

The drive towards zero-emission mobility at Audi continues apace. At the end of this year, the Vorsprung durch Technik brand will put its third all-electric model, the e-tron GT, into production.

The TFSI e badge identifies these models: TFSI refers to the turbocharged petrol engine, while the ‘e’ denotes the electric motor that supports the petrol engine and can also power the car in pure electric mode. The electric motor is driven by a lightweight, compact and highly efficient lithium-ion battery hidden under the boot floor, which drivers can recharge by plugging in at home, at work or at a roadside charging point.

Elegant and efficient
PHEVs are often regarded as a relatively recent addition to the motoring landscape, but in fact Audi built its first petrol-electric hybrid car more than 30 years ago. The Audi Duo experimental vehicle was created in 1989, and starred at the following year’s Geneva Motor Show. Based on the elegant 100 Avant, the Duo’s 2.3-litre, five-cylinder petrol engine sent 136PS to the front wheels. At the same time, a nickel-cadmium battery mounted underneath the boot floor powered a 9kW (12.6PS) Siemens electric motor that drove the rear axle. Audi also experimented with a solar-panel roof for the vehicle, to help charge the batteries on sunny days.

Hybrid technology has been enhanced beyond all recognition since then, thanks to the rapid advancements made in efficiency, power and refinement. Models such as the ultra-efficient Audi A7 Sportback 55 TFSI e quattro clearly illustrate this remarkable progress. In the blink of an eye, the car switches automatically – and seamlessly – between electric and petrol driving modes to ensure optimum performance.

Things weren’t quite so simple for the Duo Audi driver, though, who had to put the transmission into neutral and press the ‘E’ button on the dashboard to engage electric mode and access an electric driving range of up to 24 miles.

Optimum efficiency
The ample torque produced by the Duo’s electric motor meant that the car could reach 31mph before the petrol engine needed to take over. In slippery conditions, where all-wheel drive was required to pull away, both power sources worked in tandem. And, despite being built some three decades ago, the Duo included a regenerative braking system, with kinetic energy utilised to charge the battery pack when the brakes were applied.

Today, Audi PHEVs such as the A7 Sportback 55 TFSI e quattro, offer three driving modes. Hybrid mode – which is the default when route guidance is active – enables the system to select the most efficient solution automatically, be that fully electric, petrol power on its own, or a combination of both. In EV (Electric Vehicle) mode, the car relies purely on electric power unless the accelerator is pressed purposefully, in which case the engine instantly fires back into life. Finally, in Battery Hold mode, the battery charge is preserved at its existing level.

Despite its clear focus on efficiency, the Audi A7 Sportback 55 TFSI e quattro also delivers impressive performance. When the TFSI engine and the electric motor work in tandem, the system produces 367PS and 500Nm of pulling power, the latter available at the merest touch to the throttle at just 1250rpm. With power transferred to the road through a smooth-changing, double-clutch seven-speed S tronic transmission and quattro all-wheel drive, the hybrid A7 is capable of sprinting from 0-62mph in just 5.6 seconds and reaching 155mph where legally permissible. In electric-only mode, it can travel for more than 24.9 miles and reach speeds of up to 83.9mph.

Intelligent route management
Technology such as predictive efficiency assist (PEA) and predictive operating strategy (PBS) ensure optimum use of the battery’s charge. Different aspects of the journey, including roundabouts, hills, speed limits and traffic further along the route ahead, are taken into account to ensure the correct driving mode for each situation. This enables the final urban stretch of a chosen course to be driven electrically, during which the car produces no emissions.

Recharging the battery in an Audi plug-in hybrid is an effortless procedure. All TFSI e models have two ‘fuel filler’ flaps, one on each side of the car. The one on the right is for petrol, while the one on the left houses the connector for the electric charging cable. Using a connection with an output of 7.4kW, such as a home wall box or a roadside charger in town, the charging time takes two-and-a-half hours. Using the myAudi smartphone app, drivers can check the battery and range status remotely, as well as starting and monitoring the charging process.

Paving the way
Back in 1989, only ten examples of the original Duo were built. The cars were trialled in pilot programmes – including use as a taxi in the historic centre of Ingolstadt – but were never put into full production. This immaculate example now enjoys a quiet life in the Audi Museum.

However, Audi continued to explore hybrid technology, and a second version of the Duo based on the Audi 100 Avant arrived in 1991.

Six years after that, Audi became the first European car manufacturer to introduce a limited-edition production PHEV. Also named Duo, it was based on an A4 Avant. It featured a drivetrain incorporating a 90PS 1.9-litre turbodiesel engine and a 29PS water-cooled electric motor, powered by a lead gelatin battery mounted in the rear of the car. Both the engine and the electric motor were used to power the front wheels.

As with the earlier Audi hybrid studies, the production Duo featured plug-in charging, and its electric motor could also recuperate energy during deceleration. In electric mode, the A4 Avant Duo could reach 50mph, and 106mph using TDI power. Ultimately the car proved to be too far ahead of its time, and the market wasn’t ready for it. However, the hybrid technologies that were advanced during the creation of the Duo models has enabled the latest generation of Audi PHEVs to deliver significant efficiency gains, impressive performance and effortless, relaxing driving to customers today.