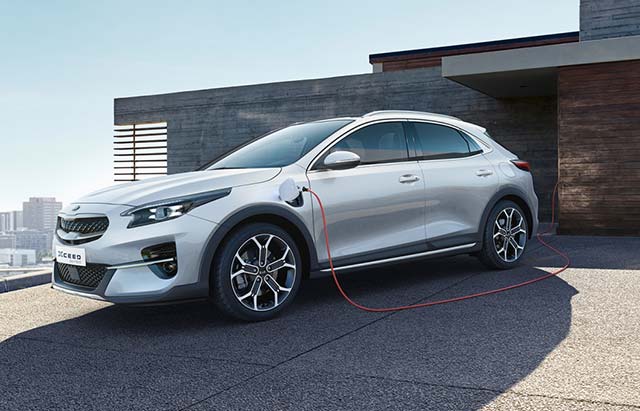 The addition of Plug-in Hybrid variants to the Kia XCeed marks the next step in Kia Motors’ vehicle electrification strategy. Now on sale in UK showrooms, the Kia XCeed PHEV represents the first time Kia has brought electrified powertrains to the Ceed family.

The Kia XCeed Plug-in Hybrid is manufactured at the brand’s European production facility in Žilina, Slovakia – the first plug-in models built by the brand in Europe, exclusively for Europe.

It is built alongside the Ceed five-door hatchback, Ceed Sportswagon, ProCeed five-door shooting brake and conventional petrol and diesel versions of the XCeed. Kia’s 7-Year, 100,000 mile warranty is offered as standard, extending cover to the new powertrain’s battery pack and motor.

The Xceed PHEV starts from £30,695 with a choice of 3 or First Edition trims.

Distinctive design features differentiate the PHEV variants from other petrol and diesel models in the Kia XCeed line-up. A new closed ‘tiger-nose’ grille at the front of the car aids aerodynamic efficiency, while a charging port is integrated into the left front wing. Grade ‘3’ models feature newly designed 16-inch alloy wheels, with the ‘First Edition’ fitted with larger 18-inch items.

Stylish, expressive and modern in design, the Kia XCeed PHEV represents a sporty alternative to traditional SUVs. A product of the brand’s European design centre in Frankfurt, Germany, the creation of the Kia XCeed has taken place under the direction of Gregory Guillaume, Vice President of Design for Kia Motors Europe. 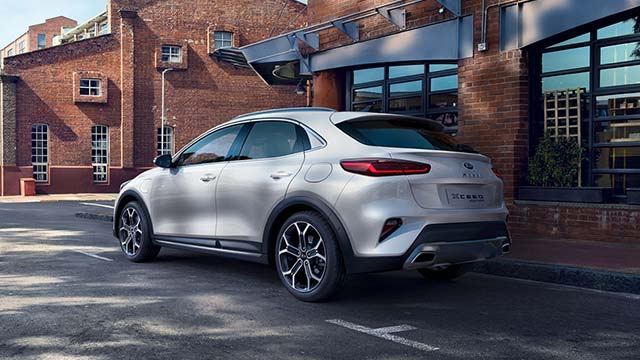 The Kia XCeed is more emotional and dynamic in format and appearance than its taller rivals, while offering something different to the other models in the Ceed range. The only body panels carried over from its five-door hatchback sibling are the front doors.

In profile, the car’s relatively long bonnet flows into the A-pillars anchored aft of the front wheels, lending the car a sporty, swept-back silhouette. While the wheelbase remains the same as other models in the Ceed line-up (2,650mm), the Kia XCeed’s front and rear overhangs are extended over the five-door hatchback model by 25mm at the front (to 905mm) and 60mm at the rear (to 840mm).

A steeply-angled fastback tailgate, and a rear ‘deck’ trailing edge which sits 60mm higher than that of the Ceed five-door hatchback, enhances the CUV’s dynamic, coupé-like, cab-rearward appearance. The Kia XCeed sits on a choice of 16- or 18-inch alloy wheels, shod with high-grip 205/60 R16 or 235/45 R18 tyres.

The front and rear of the car also represent a departure from the ‘face’ of the conventional Ceed model family, differentiating the Kia XCeed from its stablemates. With a 1,826mm body (26mm wider than the Ceed five-door), the CUV presents a more assertive face, with a more prominent grille and larger lower air intake. The headlamps are newly designed, with a LED light signature sitting within a more angular shape, topped by a slim turn signal that flows back over the wheel arches.

At the rear, new taillights emit a slim, highly technical LED light signature which, when viewed from certain angles, appears to spear forward into the shoulders of the car. The heavily creased lines running horizontally across the tailgate and rear bumper give the car a wider, more stable posture.

The car’s elevated ride height and body also present the same robust image that attracts buyers to the other SUVs in Kia’s product portfolio. The Kia XCeed’s ground clearance is 172mm on 16-inch wheels (grade ‘3’) and 184mm on 18-inch wheels (‘First Edition’ models), a rise of up to 44mm over the Ceed five-door hatchback. Wheel arch and side sill cladding and silver roof rails lend the car a tougher, SUV-like presence, with the metallic valance in the rear bumper enhancing this effect.

Inside, the  carries over the contemporary cabin architecture, with a sculptured centre console oriented slightly towards the driver. With a lower hip point than a taller SUV, and raised ground clearance over a conventional hatchback, the Kia XCeed provides drivers with a sportier driving position allowing a better view of the road ahead. The new Plug-in Hybrid models feature a range of new functionalities to enhance usability for owners looking to extract the most out of the new powertrain. 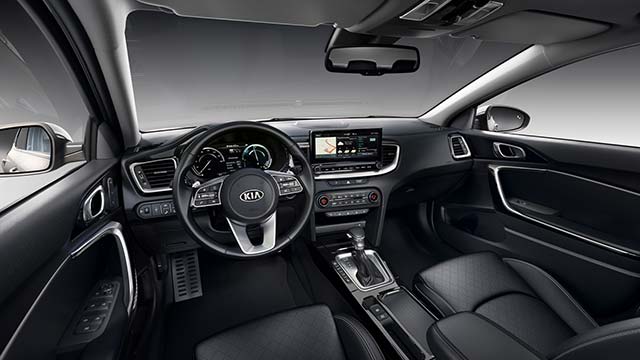 Equipped with a charging indicator, there’s a visual aid to tell owners that their car is charging or when the battery is fully charged. Its location on top of the dashboard means drivers can instantly ascertain the car’s state of charge at a glance from outside the car (for instance, when it is parked on their driveway at home and the owner hasn’t left the house yet).

A ‘floating’ touchscreen infotainment system stands proud of the dashboard, while the lower portion of the instrument panel provides a set of touch-sensitive buttons, dials and switches to control audio volume, heating and ventilation. Highly ergonomic in its layout and functionality, these controls have been designed to enable drivers to make quick changes to the cabin environment without taking their eyes off the road for any longer than necessary.

Standard equipment is Kia’s brand new 10.25-inch touchscreen infotainment and navigation system with Kia’s UVO Connect telematics. But unique to the new Plug-in Hybrid variants, the systems incorporate new functionality to help owners locate available charging points in their vicinity, or en route to their navigation destination. The screens can also show relevant information relating to the powertrain, displaying remaining charge levels in the battery and energy usage graphics. Furthermore, owners can use the touchscreen system to schedule when their vehicle should charge when plugged in at home, enabling owners to take advantage of cheaper off-peak energy tariffs. Apple CarPlay™ and Android Auto™ is integrated as standard, as well as multi-connection Bluetooth system that enables occupants to connect two mobile devices at once.

The ‘Driver Only’ heating, ventilation and air-conditioning system – activated with a new button on the dashboard – instantly deactivates airflow to all cabin vents except those nearest the driver. This is designed to reduce the draw on battery energy from the ventilation system, while still keeping the driver at their preferred temperature. Unlike conventional ventilation systems, Kia’s ‘Driver Only’ system doesn’t simply restrict airflow to certain vents, rerouting it elsewhere; instead, it switches off the fans themselves, reducing energy use at source.

The interior is finished in sophisticated soft-touch materials throughout, with a satin chrome dashboard trim, presenting a refined, upscale ambience. Buyers can choose from either black cloth and faux leather trim on level ‘3’ cars, or black leather upholstery on the ‘First Edition’.

The 8.9kWh battery pack is located alongside the 37-litre fuel tank beneath the rear bench, unlike many other plug-in hybrid vehicles, in which the battery pack takes up valuable cargo space. The XCeed Plug-in Hybrid provides 291 litres of luggage space, and up to 1,243 litres with the split-fold rear seats folded down. There is a dedicated space beneath the boot floor to store the charging cable when not in use.

A Towing Pack is fitted as standard, a rarity among cars in the hybrid class. A braked trailer of up to 1,300kg can be towed with the XCeed PHEV.

The powertrain is paired with a six-speed dual-clutch transmission (6DCT), allowing drivers to shift gear for themselves, ensuring a more enjoyable drive than other hybrid vehicles equipped with electronic continuously variable transmissions (e-CVT). Traditional e-CVT hybrids convert a portion of engine output through the electric motor, resulting in power losses from energy conversion. Kia’s 6DCT differs by allowing the full output of both the engine and motor to be transferred in parallel through the transmission, with minimal loss of energy.

The XCeed PHEV ‘3’ model is capable of travelling up to 36.6 miles on zero-emissions electric power, while the ‘First Edtion’ can travel up to 33.5 miles. This capability enables drivers to complete the majority of daily drives and short commutes on electric power alone. Recharging the battery pack using a 3.3kW charger takes 2.15 hours.

Equipped with 16-inch alloy wheels, the XCeed PHEV ‘3’ model emits just 32g/km of CO2 and achieves a combined drive cycle figure of 201.8mpg under the latest WLTP regulations. The ‘First Edition’ comes fitted with larger 18-inch alloy wheels and this results in a marginally higher CO2 emissions figure of 38g/km, with 167.6mpg on the WLTP combined driving cycle. Both models have a maximum speed of 99mph and can complete the 0-60mph dash in 10.6 seconds.

Kia’s new Virtual Engine Sound System is included, which comprises an audible warning system which activates in electric-only mode at low speeds or when reversing. The system generates virtual sound levels of up to 59 dBA to safely notify pedestrians of the car’s presence.