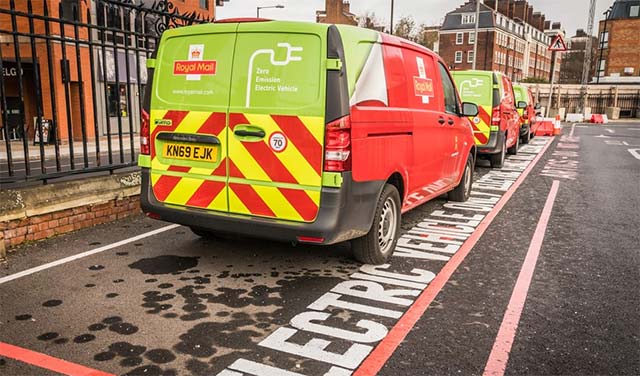 Londoners will see more of Royal Mail’s iconic red vans turn green and red this month, as the Company announces a further deployment of zero-emission, electric vans. The vehicles will deliver letters and parcels across selected locations in the capital and surrounding areas.

With 30 electric vehicles already in operation, the rest of the vans will roll out over the next two months. Once operational, electric vans will make up a little under half of the mail centre’s total fleet of 216 small vehicles. The initiative supports and accelerates Royal Mail’s shift to zero emission technologies.

Charged via wall or floor mounted charging posts, the mix of Mercedes-Benz eVito and Peugeot Partner Electric vans are specially designed to help postmen and women deliver letters and parcels in a secure and environmentally-friendly way. With load capacities ranging from 3.7m3 to 6.3m3, the vehicles will operate as part of the Mail Centre’s usual delivery routes.

The three year framework will see EDF provide EV charging points, associated maintenance and ancillary items such as signs, bollards and wheel stops. The initial scope for this agreement will see chargers installed on Royal Mail Group sites in the South East of England, with potential for this to increase as required.

Choosing EDF as their framework provider of choice forms part of Royal Mail Group’s commitment to sustainability and reducing their carbon footprint. The adoption of EVs across its business will play a key part in achieving its sustainability goals.