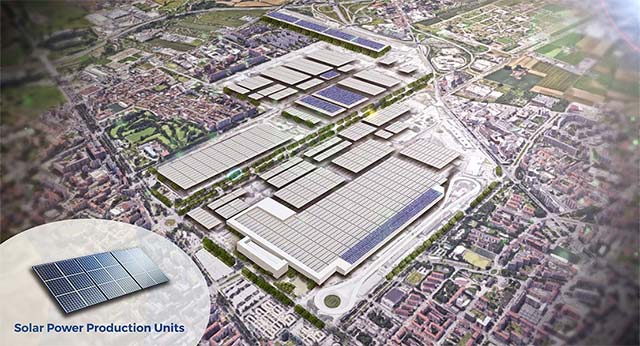 FCA continues to launch sustainability-focused initiatives related to electrification and has further strengthened the investment plan for its Turin manufacturing hub, which forms part of the overall €5 billion industrial plan for Italy over the 2019-2021 period.

In collaboration with Terna, it has already presented a project for development of the world’s largest Vehicle-to-Grid (V2G) hub, which will connect a fleet of 700 electric vehicles (Fiat 500 BEV) via a two-way recharging infrastructure capable of supplying 25MW to the energy grid to balance demand during peak periods.

– The installation of solar power production units at Mirafiori, consisting of a total of 120,000 square metres of photovoltaic panels mounted on building roofs and a further 30,000 covering 1,750 parking spaces and capable of generating up to 15MW of electricity. This will contribute to a more than 5kt reduction in CO2 emissions and supply sustainable energy to charge the electric models manufactured on site.

– The roof top project will be implemented in partnership with Edison, while the car park project will be implemented in partnership with ENGIE. The photovoltaic panels installed by Edison will cover the historic Officine 64, 71 and 72 buildings, the Body Shop Assembly Centre and the RG Centre located near the Mirafiori test track. For the ENGIE project, photovoltaic panels will cover the V2G car park currently under construction at Mirafiori. The energy generated by these installations will provide FCA with major sustainable benefits.

– The installation of 850 EV charging points across the Turin manufacturing hub, including 750 in employee parking areas.

These projects are being implemented alongside the enhancement of other centres of excellence at the Turin hub and focus on technology and the continuous improvement of production processes. One of these is the Additive Manufacturing Centre which, in support of design and engineering activities, develops the know-how and methodologies to create products through the deposition or fusion of materials layer-by-layer, without the need for stamping or tooling. Another is the Manufacturing Development Centre’s Academy, a training facility focused on skills development for technologies and new processes, which provides 80,000 hours of training to some 5,000 people a year.

The new sustainability projects will be rapidly integrated with the product investment plan, which is moving ahead at full speed and is set to completely transform the Turin manufacturing hub into a centre of excellence in electrification at both national and international level.

The product investments for the Turin manufacturing hub launched so far include:

Combined, the investments already launched at the Turin manufacturing hub total approximately €2 billion. In the meantime, to manage the additional requirements associated with the new product launches, FCA has begun the hiring process for approximately 100 trained specialists.

Pietro Gorlier, COO for FCA’s EMEA Region said: “The new sustainability-focused projects announced today, together with the operational milestones already achieved, demonstrate how FCA is continuing to strengthen its activities, with the contribution of its people and its centres of excellence. With a series of new product launches and these innovative electrification-related projects, 2020 will be an incredibly important year for the Group’s future.”