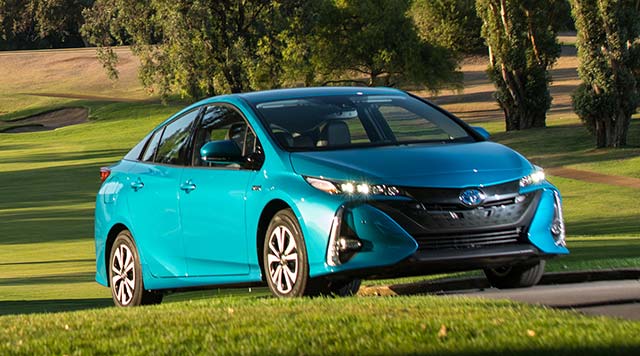 After several years of all-electric cars dominating the annual Greenest vehicles list, 2020 brings a surprise – a resurgence of the hybrid, whether plug-in or gasoline only. With slightly higher scores, hybrids account for nine of the 12 greenest vehicles in the 23rd GreenerCars’ ratings, released by the American Council for an Energy-Efficient Economy. These high-scoring hybrids include the Toyota Prius Prime, three others by Toyota, four by Hyundai-Kia, and one by Honda.

The auto industry, despite slowing sales, labor disputes, trade wars, and regulatory unrest, is producing more of the most technologically advanced and fuel efficient vehicles ever offered. This is great news for consumers, who continue to have plenty of options to buy a greener, more efficient vehicle.

While EVs get a lot of buzz, the top-scoring 2020 car reflects impressive improvements to the internal combustion engine that reduce tailpipe emissions and fuel consumption. Stronger tailpipe emission standards and lower emissions from the production and distribution of gasoline have also helped nudge hybrids to the top of the list.

“Some level of vehicle electrification is the clear path forward for both cars and light trucks, and for the foreseeable future, that will include everything from mild hybrids to all-electric vehicles,” said Eric Junga, senior transportation research analyst at ACEEE. “Gasoline hybrids are hitting seriously impressive fuel economy numbers and are available in nearly every vehicle category. And a hybrid full-size pickup may soon follow.”

The 2020 Greenest List features the most environmentally friendly cars now available. Each car is given a Green Score based on an environmental damage index (EDX), which reflects the cost to human health from air pollution associated with vehicle manufacturing, the production and distribution of fuel or electricity, and vehicle tailpipes.

Scores for many battery or all-electric vehicles dropped slightly from last year. For some, this is a result of an update to the GreenerCars scoring model that calculates emissions from manufacturing different types of battery chemistries. Others, including the Hyundai Ionic Electric and Kia Soul Electric, come with substantially larger batteries and a considerable boost in driving range for 2020 that increase emissions from manufacturing and recycling and also slightly increase per-mile energy consumption.

Still, the greenest list has become increasingly competitive over time. We score vehicles on an even playing field that uses average emissions across the country, but the emissions associated with a particular vehicle can depend on many factors. One of the most significant impacts for EVs is the fuel used to generate electricity where the vehicle is charged, both today and in the future. Our analysis uses US government projections, which include slower growth in renewable energy generation than many other forecasts. For those considering whether a particular EV would fare better for their particular area, check out the GreenerCars Electric Vehicle Emissions Calculator.

This marks the fifth consecutive year that the Greenest List contains no vehicle with solely an internal combustion engine. Even a small degree of electrification can greatly improve fuel economy and power, giving automakers an important tool to maintain the power that consumers expect, while allowing electric motors to help engines operate as efficiently as possible. Today’s results are truly a glimpse into the future of more-efficient and greener vehicles driven primarily by electrification.

Many of these vehicles return to the Greener Choices list from prior years, indicating both their popularity with consumers and the ability of the automaker to design and sell greener vehicles. While a number of models are hybrids, most are standard gasoline-fueled vehicles that achieve better fuel economy today compared to some hybrid options of just 10 years ago.

The Meanest List, as usual made up of gasoline-powered large SUVs, pickup trucks, and European luxury cars that are the least friendly to the environment. The Jeep Grand Cherokee Trackhawk takes the first (or last) position for a second year, with the rest of the list populated by regulars from prior years. 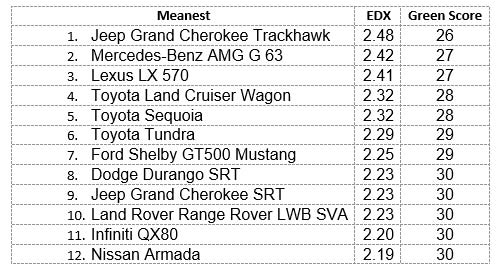