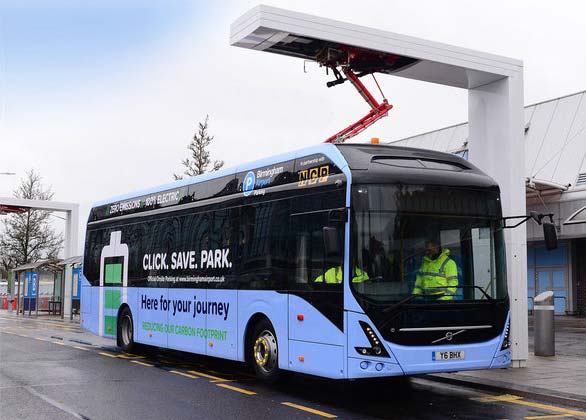 The new service is part of a framework agreement initiative from Birmingham Airport for its future vehicle provision with a drive to provide a truly ‘green’ transport system, while at the same time making energy savings and reducing life cycle costs.

Volvo Bus and the 7900e were chosen by Birmingham Airport following a process which looked at a number of vehicle manufacturers before making the decision to go with Volvo. An important consideration was to have a high standard of technical and service support readily available and on a local level. All of the skills support and infrastructure required by the Airport are accessible via the Volvo dealership network.

With 24/7 operation being a vital part of the service, each Volvo 7900e bus will be recharged en route using the ’OppCharge’ opportunity charging pantograph system.  Charging takes up to six minutes to complete, giving flexibility and enabling continuous operation.

The pantographs have been installed outside the airport terminal at stops two and four. The vehicles can also be charged by 2 100kW CCS combo 2 chargers located at the coach park making them the first vehicles capable of this dual purpose charging offering unrivalled flexibility.

The buses will operate on all car park routes, including the 7.5km route which operates out to the car park at Elmdon and are expected to clock up an annual mileage of approximately 30,000km.

Nick Page, Managing Director of Volvo Bus UK & Ireland, said: “After all the planning during the last 12 months, it is great to see the 7900e going into service at Birmingham Airport, providing a fantastic environmentally friendly bus service for airport customers and stakeholders.  This is the first project of its type for the UK using the ‘OppCharge’ opportunity charging pantograph system for an airport service, with Volvo supplying a turnkey solution delivering the infrastructure and civils in addition to the vehicles.

“The 7900e has been tried and tested here and throughout Europe, including Sweden, Germany and Luxembourg.  As well as a UK wide demonstration tour, there are eight 7900es deployed in Harrogate where it is operating a full town service.  In all instances, it has demonstrated the contribution that can be made to improving air quality where it is in service.

“Our ongoing vision and goal is to develop a range of vehicles and technologies which include hybrids, and fully electric vehicles, that will lead to better air quality for people living, working and visiting our towns and cities across the UK. These vehicles not only provide well to wheel greenhouse gas emissions benefits but also deliver zero tailpipe emissions at the airport.”

“Nick Barton, CEO of Birmingham Airport, said: “I’m extremely proud to say we are the first UK airport to implement six fully electric landside buses which will operate via a fast charging pantograph system. The buses are not only a big win for us in terms of the reduction in emissions, but they will also contribute to providing an improved passenger experience. The 7900e Volvo buses are considerably quieter than the buses we had in use previously and are equipped with location-based passenger updates as well as USB charging built into every seat.

“This is a really exciting time for the Birmingham Airport. Over the next 15 years we are investing significantly to improve our facilities and service for customers, whilst reducing our carbon footprint to reach an ambitious target of net zero carbon by 2033.

“I’d like to thank Volvo Bus UK for supplying the new electric buses and look forward to a greener future at Birmingham Airport.”

Part of Volvo’s Electromobility range, the 7900e was first introduced in mainland Europe in 2015, and provides up to 80% lower energy consumption than an equivalent sized diesel bus. It is a two-axle bus with electric motor and four high capacity 50 kWh Nickel Manganese Cobalt batteries and offers zero tailpipe emissions.