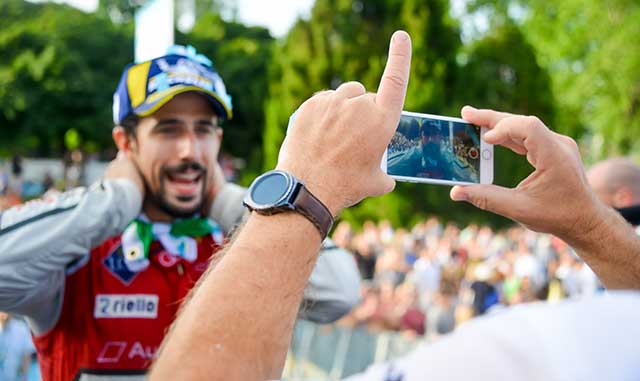 The ABB FIA Formula E Championship is set to introduce a first-of-its-kind digital product for this coming season – working together with some of the biggest content creators to reach new and younger audiences as part of an innovative partnership with YouTube.

Starting with a supplementary streaming service in the UK – with the ambition of expanding viewing opportunities in other territories and eligible markets – Formula E will show every E-Prix live on YouTube with guest appearances and influencer involvement throughout the course of the season.

The on-screen talent will host each show from a bespoke studio set-up at YouTube Space London, with regular anchor Laurence McKenna sitting alongside rotating content creators such as KSI – who has almost 20 million subscribers and will form part of the presentation team for the SAUDIA Ad Diriyah E-Prix on December 15.

In a bid to continue opening-up the fully-electric series to a younger demographic and making the sport more accessible than ever before, Formula E is once again breaking the mould and re-inventing the way fans follow and consume sports – in line with the viewing habits of a digitally driven audience.

The list of alternating content creators will be revealed across official Formula E digital platforms in advance of each race and chosen from a pool of top influencer talent in collaboration with Goat – the leading global influencer marketing agency.

Building on the successful partnership with Goat – who were appointed ahead of last season – the ABB FIA Formula E Championship recently received recognition at the highly-acclaimed International Performance Marketing Awards, collecting the accolade for ‘Best Influencer Marketing Campaign’.

Ali Russell, Media & Business Development Director at Formula E, said: “We always try to push the boundaries of what’s possible at the ABB FIA Formula E Championship – not only developing innovations with the cars on track, but also with our experience and offering to fans trackside, at home and on the move. Coming together with like-minded companies such as YouTube to provide new ways to watch electric racing is what separates Formula E from other sporting properties and rights-holders. Working in tandem with some of the biggest names and influencers allows us to grow our existing audience, which is primarily a younger and more digitally-engaged demographic. This partnership truly fits their needs and viewing habits.”

Tomos Grace, YouTube’s Head of Sport, EMEA, said: “Seeing YouTube creators centre stage for such an important sporting event is an exciting moment for YouTube. We look forward to working with Formula E on this first-of-its-kind project over the coming months.”

Working with KSI and his management OP Talent for the season-opener and first episode in Ad Diriyah, JJ said: “I can’t wait for the first race, where it’s going to be great to see YouTube disrupt the traditional sports broadcasters.”

Laurence McKenna, renowned content creator and show host, said: “I’m excited to be part of this ground-breaking and innovative project. I believe Formula E is leading the way in how sport sets the agenda, with this generation and the next, and YouTube is the place to do that. As rights-holders they’re doing the smart thing by allowing creators and their audiences to decide how we consume the sport. Their faith in the platform and community is important.”

Arron Shepherd, Co-Founder of The Goat Agency, said: “Goat is delighted to be involved in this pioneering project. After a successful season four, where together with Formula E we picked-up ‘Influencer Campaign of the Year’ at the International Performance Marketing Awards, it’s a privilege to be able to work with such an innovative brand on a truly ground-breaking initiative. Additionally, to have YouTube as a partner in this alongside a stable of the top UK influencers will allow Formula E to engage with a new generation of fans like never before, bringing the traditional broadcast model into the 21st century.”