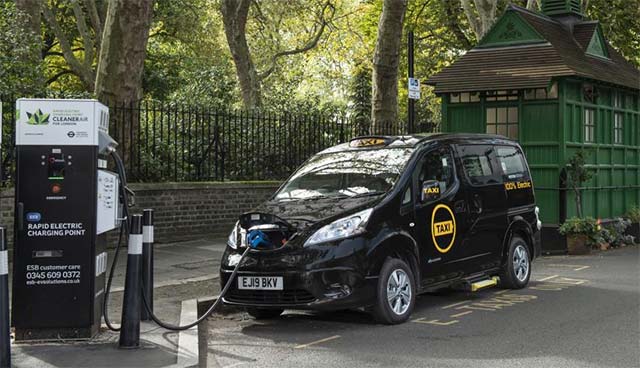 Dynamo, UK-based vehicle manufacturer, has unveiled the first 100% electric, zero emission, ‘Hackney Carriage’ black cab for London that has been officially approved by Transport for London (TfL), the Dynamo Taxi.

The last time London had a 100% electric taxi was 120 years ago, when Queen Victoria was still on the throne. The Bersey Taxi, was introduced in 1897 and was operational until 1899. It had a range of 30 miles between each recharge.

The Dynamo Taxi is expected to accelerate the retirement of current diesel taxis from city streets across the UK, improving air quality. Taxis currently account for 16% of all vehicle nitrogen oxide (NOx) emissions in central London, according to TfL figures.

To curb emissions, Transport for London has introduced new, tougher, licencing requirements for new taxis, limiting their emissions to 50g/km CO2 and a mandatory zero emissions range of at least 30 miles. Any new taxi vehicle has to meet these emissions criteria to operate within London.

London has also committed to being a zero carbon city by 2050, with plans to introduce local zero emissions zones on top of the current ULEZ. Research by the Mayor of London’s office found the London’s Ultra Low Emissions Zone has reduced roadside Nitrogen Oxide pollution by a third since its introduction earlier this April.

The average taxi driver in London covers a distance of 90 to 120 miles a day, spending roughly £25 in fuel a day. Using a home charger, it will cost Dynamo Taxi drivers £3-£6 in electricity to cover the same distance, saving drivers nearly £20 a day in running costs alone. Based on the Nissan e-NV200 Evalia MPV, the Dynamo Taxi has a range of up to 187 miles from a single charge (WLTP City) – far above the average distance taxi drivers in London cover daily – and is compatible with 50kW CHAdeMO rapid charging.

The Dynamo Taxi costs £55,495, and is eligible for £7,500 in Government Plug-in Car Grant funding bringing the price down to £47,995 for drivers, making it very competitive in the EV taxi market.

Taking the highly successful Nissan e-NV200 Evalia MPV as a basis, each Dynamo Taxi is re-engineered into a wheelchair-accessible vehicle capable of carrying up to five passengers by Dynamo at its Coventry headquarters.

Dynamo has fully engineered the interior of the e-NV200 Evalia MPV for the taxi market, including the latest in contactless payment solutions, passenger and driver convenience. Drivers will benefit from a built-in infotainment system, heated seats and steering wheel, while passengers have custom-built seating, wheelchair accessibility and an enlarged glass roof for extra lighting. To satisfy Transport for London approval, Dynamo has reduced the Nissan’s turning circle to meet the TfL’s 25-foot turning circle requirements, allowing it to tackle the tightest of London’s streets.

Drivers can currently view the taxi at Dynamo’s London dealership in Colindale, NW9, which opened in June. Deliveries of the first Dynamo Taxi’s begun in October 2019.