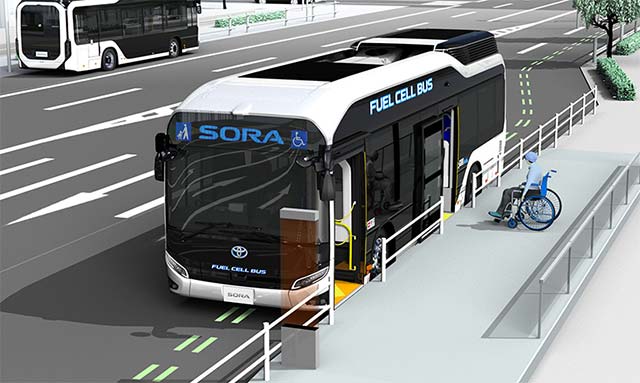 Toyota Motor Corporation announces the launch of its updated Sora Fuel Cell Electrified Vehicle bus (FCEV bus) and improvements to its preventive safety performance. Specifically, Toyota has improved the Sora’s preventive safety performance through the use of ITS functions (ITS: Intelligent Transport Systems). Additionally, the Sora’s transportation capacity, speed, and punctuality have been expanded.

As a public transport bus, the Sora requires both a high operation rate and high safety performance at all times. To this end, the updated model includes a function that cautions the driver when making right turns at intersections, and a system that enables passengers to activate an emergency stop in urgent situations, such as if the driver suddenly falls ill.

The updated Sora is equipped with a new system that shares information on the distance between the vehicles, to prevent two or more buses traveling in a convoy from being separated at traffic lights and bus stops, leading to overall improvements in transportation capacity, speed, and punctuality of the buses.

– Right-turn Collision Caution: When turning right at an intersection, the system activates an alert to indicate potential hazards for the driver, such as oncoming vehicles or pedestrians on the road.
– Red Light Caution: When approaching a red light at an intersection, the system activates an alert if the driver does not ease off the accelerator or if the driver does not see the red light.
– Red Light Deceleration Assist: When approaching an intersection and stopping for a red light is likely, the system encourages early deceleration.
– Signal Change Advisory: In order to prevent delayed starts, a screen displays the remaining time until the traffic light changes.

If an urgent situation occurs, such as the driver suddenly falling ill, this system allows the driver or passengers to press the emergency brake switch to decelerate the bus and bring it to a stop3. The control system has been designed specifically for public transport buses, where the safety of standing passengers is crucial. As the bus starts to decelerate, red flashing lights and a voice alert passengers to the emergency; those outside the vehicle and nearby are alerted to the emergency via a horn and flashing stop lights and hazard lights.

If the millimeter-wave radar installed at the front of the bus detects there is a risk of colliding with a vehicle or obstacle ahead on the road, it alerts the driver with a warning buzzer and activates a warning notification on the monitor screen. The system considers the safety of standing passengers and seated passengers who have not fastened their seatbelts, and supports the driver in avoiding collisions by assisting with steering.

The service uses information on buses, bus order, and distance between buses traveling in a convoy to prevent the convoy from being separated at traffic lights and bus stops; this contributes to improved transportation capacity, speed, and punctuality.

– Vehicle-Convoy Recognition Function: Using vehicle-to-vehicle communications and millimeter-wave radars, the system recognizes information―within the limits of maximum bus numbers for any given section―on the buses, bus order, and distance between buses traveling in convoy, and notifies drivers of the convoy size. In order to ensure that the entire convoy can pass through a set of traffic lights at the same time, the last bus in the convoy sends a request to the traffic lights to remain green for an extended period of time. Vehicle-to-vehicle communications and millimeter-wave radars are used to recognize the formation of a vehicle convoy.
– Bus Stop-Start Information System: This system recognizes when customers board and alight from buses traveling in convoy, and helps ensure the entire convoy leaves the bus stop at the same time.

The buses are equipped with all-speed radar cruise control, which supports smooth acceleration and deceleration. If a preceding vehicle is also equipped with communicating radar cruise control, the bus uses information shared via vehicle-to-vehicle communications to respond rapidly to the acceleration and deceleration of the preceding vehicle, which enables the buses to follow smoothly. The system also contributes to the maintenance of a constant inter-vehicle distance when traveling in a convoy on dedicated bus roads4, and to the stable driving speed of the vehicles that follow.

– ITS Connect Wave-Type Public Transportation Priority System with Convoy Function: Using dedicated ITS radio, the system sends requests to infrastructure devices to extend green light times or reduce red light times. When traveling in a convoy, the last bus in the convoy sends a request to extend the green light time, thereby reducing the risk of the convoy from being separated by a red light.

– Automatic Arrival Control System (Optional): The system detects guidance lines on the road surface and automatically steers and decelerates the bus, causing the bus to stop at the designated boarding and alighting location, and minimizing the gap to the bus stop itself. This assists boarding and alighting for passengers using strollers or wheelchairs. 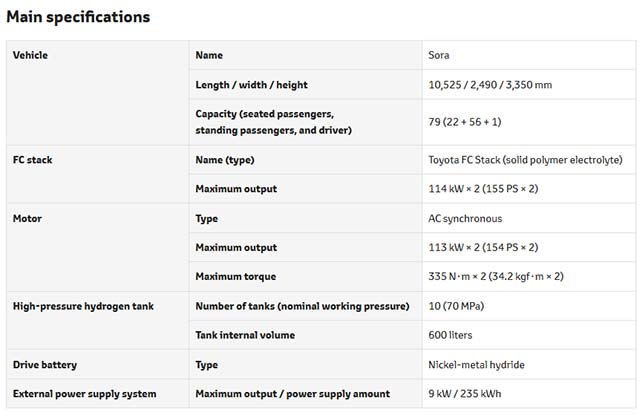