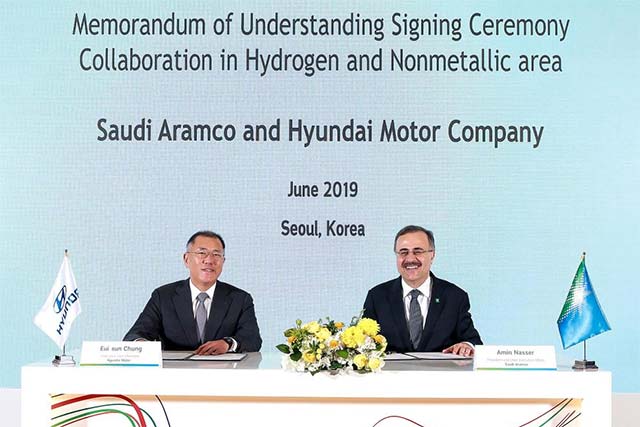 Hyundai Motor Company signed a memorandum of understanding (MOU) with Saudi Arabian Oil Company (Saudi Aramco). The MOU provides a framework to accelerate expansion of a hydrogen ecosystem in the Korean and Saudi Arabian markets, and to explore the use of advanced non-metallic materials in various fields including the automotive industry.

In addition to collaborating on hydrogen supply and the deployment of hydrogen refueling stations in Korea, Hyundai Motor and Saudi Aramco will grow awareness of Hyundai’s hydrogen fuel cell vehicles in the Kingdom of Saudi Arabia.

The companies will also team-up to expand the adoption of non-metallic materials across a wide range of applications, including the use of carbon fiber and carbon fiber-reinforced plastic. Additionally, the companies will cooperate on the development of future automotive technologies.

“The collaboration of Hyundai Motor and Saudi Aramco will accelerate progress toward a hydrogen society by expanding access to a robust hydrogen infrastructure and fuel-cell electric vehicles,” said Euisun Chung, Executive Vice Chairman (EVC) of Hyundai Motor Company. “Both businesses are leaders in the hydrogen value-chain, and our collaboration will support global action for a better, more sustainable future, while exploring future automotive businesses and technologies”

According to the International Energy Agency’s recently released report during the G20 Energy and Environment Ministerial meeting in Japan, hydrogen is currently enjoying unprecedented political and business momentum, with the number of policies and projects around the world expanding rapidly. It concludes that now is the time to scale up technologies and bring down costs to allow hydrogen to become widely used.

At an exclusive investor event held on the day ahead of the G20 Ministerial meeting, EVC Chung shared the company’s belief that a ‘hydrogen-powered society’ is the most viable solution to a successful energy transition. In turn, the company has made important steps toward a hydrogen society lead by its commitment to sustainable transportation, as part of its FCEV Vision 2030. The vision aims to create a worldwide hydrogen society that leverages hydrogen technologies beyond the transportation sector.