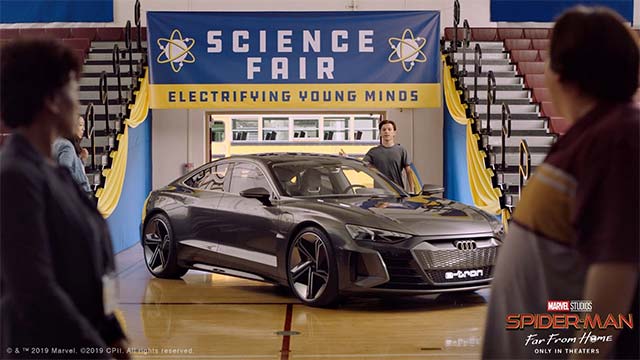 What do Peter Parker (a.k.a. Spider-Man) and his best friend Ned need to win a science project? Easy: just the best electric motor of all time. Good thing that the two are talented enough to build their prototype with a few twists of the wrench.

The electric motor wouldn’t make much of an impression on its own, though. To increase their chances of winning the competition, Peter Parker arranges at the last minute to use nothing less than the Audi e-tron GT concept – the perfect way for the engine to show what it can do.

Sony and Audi release a short teaser titled The Science Fair prior to the world premiere of Spider-Man: Far From Home. Anticipation for the newest movie set in the Marvel Cinematic Universe continues to grow. The production of the video clip is so close to the original movie that you might get the impression that it is an unreleased scene or a funny clip from the closing credits. It makes the long wait until the official launch in the USA on July 2nd more bearable.

“Teaming up with Sony Studios gives us an ideal opportunity to stage Audi´s electric offensive in a spectacular environment and to customize this important technology for a highly engaged audience. Therefore product placement plays a significant role in our new brand strategy“, said Sven Schuwirth, Head of Brand Audi, Digital Business and Customer Experience at AUDI AG.

The teaser The Science Fair is the result of a major cooperation between Sony Pictures Entertainment and Audi. For Audi, appearing in a movie is nothing new: cars from the brand with the Four Rings have already been the trusty sidekicks of many a hero in the Marvel Cinematic Universe. Several Audi models have already snagged near-starring roles in Iron Man, Avengers, and Spider-Man: Homecoming. And car fans can expect a standout performance in the new Sony movie, as well. The Audi e-tron will appear on the big screen along with Spider-Man and other Audi models.