Video: charging of the Volkswagen ID.R 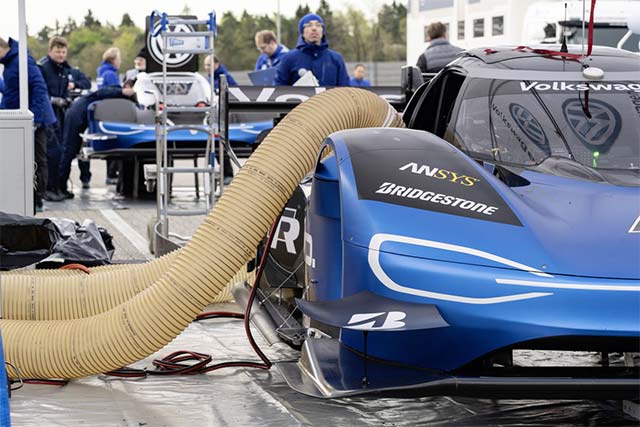 It is a science in itself: the ID.R charging system. Only with optimally charged batteries can the pursuit of the lap record for electric vehicles on the 20.8-kilometre Nürburgring-Nordschleife succeed. To this end, driver Romain Dumas (F) will also have to deploy the full system performance of 500 kW (680 PS) on the three-kilometre ‘Döttinger Höhe’ section at the end of the Nordschleife, which is nearly dead straight.

“To drive a whole lap of the Nordschleife with full performance is a huge challenge for electric drive,” says François-Xavier Demaison, Technical Director of Volkswagen Motorsport. “Therefore, optimal charging before the lap begins, along with the recuperation when driving, are of crucial importance.” Marc-Christian Bertram, Head of Electrics and Electronics at Volkswagen Motorsport, continues: “The ID.R’s battery has a particularly high power density. It is not maximum range that is required, but rather the highest possible power output. That is why we chose a lithium-ion battery consisting of eight modules with 56 cells each, divided into two blocks next to the driver and behind the monocoque.”

Battery development with support from production car research at Volkswagen

The battery system of the Volkswagen ID.R was developed with expertise from the production car research department at Volkswagen. “One example of this is the isolation technology that shields the on-board electronics from the electromagnetic emissions of the high-voltage system,” explains Bertram. The electric motors on the ID.R operate at 915 volts. In return, insights from the ID.R’s activities flow back into production car development.

This knowledge transfer also influences the charging strategy, both during external charging and during recuperation (brake energy recovery) while driving. “The aim is to send the ID.R onto the track for the record attempt with each individual battery cell at the optimum state of charge,” says Bertram. In the temporary service park at the Nürburgring, the ID.R is supplied by two fast-charging systems that operate with a comparatively low power output of 90 kW each. “As a result, the heat generation remains low, even though the batteries are completely charged within only about 20 minutes,” explains Bertram.

In addition, the ID.R’s internal battery system is connected to an air conditioning system to provide optimal charging conditions regardless of the outside air temperature. “A battery temperature of about 30 degrees Celsius is ideal,” continues Bertram. “Because of this, the charged battery is normally preheated before the first lap and then cooled when stationary and charging.”

As with the hill climb on Pikes Peak, Volkswagen Motorsport will use an innovative power generator to charge the ID.R batteries. The mobile unit works with the renewable raw material glycerin (which, chemically speaking, is sugar alcohol), obtained as a waste product in, for example, the production of bio-diesel. As a fuel, glycerol burns almost pollutant-free and almost CO2-neutral.

The high efficiency of the ID.R also means that the energy released under braking can also be used. During these moments, the two electric motors on the ID.R provide part of the braking effect and work as generators. Through this recuperation, the race car generates about ten per cent of the required energy itself.

When determining the recuperation strategy for the record attempt on the Nordschleife, Bertram and his team will use the experience gained by Volkswagen Motorsport at the hill climb on Pikes Peak, which is approximately the same distance. Romain Dumas set a new all-time record there with the ID.R in June 2018. “The phases at Pikes Peak with a particularly high power output, and therefore the highest load on the batteries, came during the sections with a steep incline,” says Bertram. “On the Nordschleife, it is the long straights, on which you give it full power for a period of up to almost a full minute. The battery must not overheat on these parts of the track.” On the racetrack, the battery system of the ID.R is cooled by the wind.

And there is certainly enough of that: on the Nordschleife, the ID.R achieves significantly higher speeds than on the winding hill climb up Pikes Peak to 4,302 metres above sea level. At the ‘Race to the Clouds’, the Volkswagen’s electric race car travelled at an average speed of 150 km/h. In excess of 185 km/h is expected on the Nordschleife.