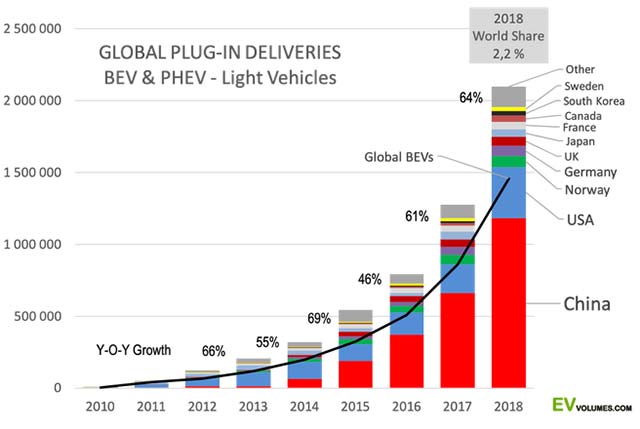 Global plug-in vehicle deliveries reached 2.1 million units for 2018, 64% higher than for 2017.  These include all BEV and PHEV passenger cars sales, light trucks in USA/Canada and light commercial vehicle in Europe and China.

Their share in the global light vehicle market was as high as 3.8 % in December and 2.2 % for 2018 in total. 69% of sales were all-electric (BEV) and 31% were plug-in hybrids (PHEV). All-electric vehicles have gained 3% share in the mix since 2017, driven by growth in China, the arrival of the Tesla Model-3 and losses for PHEVs in Europe when the new fuel economy test procedure WLTP became effective in September.

The largest growth contributor by far was China, where sales increased by over 500,000 units to 1.2 million in 2018. China stood for 56% of all plug-in sales. Europe growth was more moderate at 34%, held back by tight inventories, long waiting lists for popular BEVs and the run-out of  high-selling PHEVs. Plug-in sales in USA increased by 79% and the long awaited Tesla Model-3 contributed with 138,000 units, most of them in the second half of 2018. Deliveries were limited to USA and Canada during the first year. It still became the best-selling EV of all categories in 2018 and even dominated luxury car sales in North America. Sales outside China, Europe and USA were 150,000 units (+39%), with Japan again in reverse, but other markets like Canada and South Korea growing much faster than average.

The smaller car markets lead in EV adoption. The share leader is Norway, as usual, where 40% of new car sales were plug-ins in 2018. Iceland comes 2nd with 17.5% and Sweden 3rd with 7.2%. Among the larger economies, China leads with a plug-in share of 4.3%. All other car markets with over 1 million total sales show around 2% for 2018.