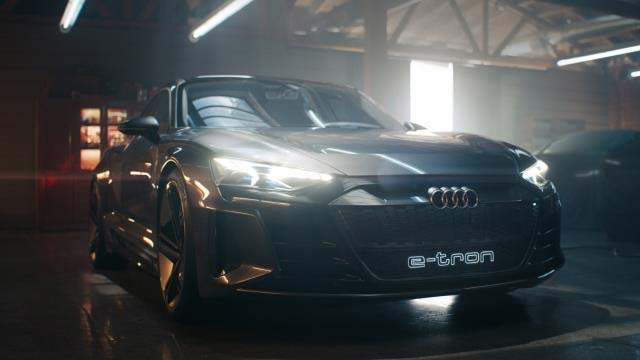 “Cashew” will air on Sunday, Feb. 3 during the second quarter of the big game. San Francisco-based Venables Bell & Partners created the commercial. This year marks Audi’s 10th appearance during the game.

The commercial was directed by Ringan Ledwidge.

“The biggest night in football offers a national platform to share our commitment to electrification while showcasing the future of electric performance with the Audi e-tron GT concept, which Audi anticipates going into production in two years. Discerning viewers will also notice a cameo by the e-tron SUV, which is scheduled to hit U.S. showrooms in the 2nd quarter of this year,” said Loren Angelo, vice president, Marketing, Audi of America.

“Cashew” tells the humorous story of one man’s version of utopia, made complete by his vision of the perfect car. As the spot begins, viewers are transported through an ethereal field alongside a man walking. As he arrives at a rustic house, the man is greeted by his late grandfather and ushered into a garage where the all-electric Audi e-tron GT concept is revealed. Delighted, the man pushes the start button and the vehicle comes to life. Just before he can start his drive, the man is abruptly pulled back from his paradise as his body begins to convulse. Back in an office setting, the man has just coughed up a cashew nut after receiving medical assistance from a colleague. As the colleague utters “You’re one lucky man. I was worried about you for a minute,” a look of utter disappointment paints the man’s face. The commercial concludes with the message: “A thrilling future awaits. On Earth. One third of all new Audi models will be electrified by 2025.”

An electric future awaits
Scheduled to arrive stateside in the second quarter of 2019, the 2019 Audi e-tron SUV is the first of three all-electric models Audi plans on introducing in the United States. The additional two concept models are expected to be the Audi e-tron Sportback (expected debut in 2019) and the Audi e-tron GT (expected debut in 2020). Audi anticipates offering more than 20 fully electric and plug-in hybrid models globally by 2025.

Featured in this year’s ad, the Audi e-tron GT concept is a fully electric, lightweight four-door sports car. With seating for four passengers, the Audi Sport model is designed for both the road and track—with everyday usability and premium touches, including the driver-oriented cockpit, all-vegan interior and consistent use of recycled materials throughout.

An Audi ecosystem
Helping to ensure customers confidence as they approach their electric future, Audi has helped establish an ecosystem of support for convenient charging and EV mobility. Customers can enjoy the convenience of scheduling home charging installation through Amazon Home Services, and for e-tron buyers, 1000 kWh of charge powered by Electrify America is included at no additional cost for use in the first four years of ownership.

Audi e-tron buyers will have the opportunity to ready their homes for their all-electric SUV with available Amazon Home Services in the first-ever home charging collaboration between Amazon and an automaker. “Audi Home Charging powered by Amazon Home Services” offers e-tron buyers a fully digital experience for scheduling in-home electric vehicle charging installations, designed to make the process of home charging set up as simple as possible.

For charging on the go, the e-tron will be supported by a nationwide charging network, “Powered by Electrify America.” By July 2019, this network will include nearly 500 fast-charging sites complete or under development throughout 40 states and 17 metro areas. Offering advanced charging, Electrify America’s chargers are capable of delivering up to 350kW.

Big Game storytelling
The Audi brand has a rich history of telling compelling stories on game day—from delivering an empowering message on pay equality with “Daughter” in 2017, to shooting for the moon in 2016 with “The Commander” to allowing online viewers to vote on the commercial’s ending in 2013 with “Prom.”