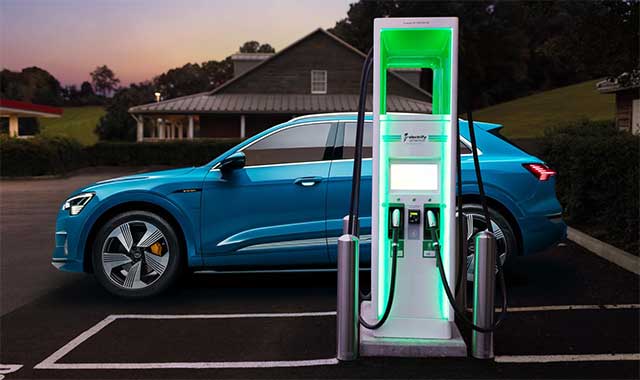 At the global debut of its first fully electric vehicle – the Audi e-tron — Audi of America announced an agreement with Electrify America to provide e-tron owners with a nationwide charging plan.

“The arrival of the e-tron is timed perfectly with a ten-year, $2 billion investment being made in this country’s charging infrastructure by Electrify America,” said Scott Keogh, president of Audi of America.

“For charging on the go, the e-tron will be supported by a nationwide charging network–and owners will receive 1,000 kilowatt-hours of charging at Electrify America sites over 4 years,” continued Keogh.

By July 2019, the Electrify America network will include nearly 500 fast-charging sites complete or under development throughout 40 states and in 17 metropolitan areas. In California, that includes 160 ultra-fast charging sites.

Over 2,000 chargers will be located on average 70 miles apart on highways across the country, providing up to 150 kilowatts to charge the e-tron’s 95 kilowatt-hour battery that can reach an approximate 80 percent charge in about 30 minutes.

In a related news, Audi of America announces a partnership with Arcadia Power, a nationwide digital utility service, to allow owners of Audi’s first all-electric vehicle—the e-tron—to support renewable energy production, and to help offset at-home charging and other electricity consumption. The collaboration coincides with the world premiere of the e-tron and the opening of the company’s reservation system for U.S. customers.

Through the partnership, U.S. e-tron customers who receive energy bills from their local utilities can offset their home electricity consumption by supporting renewable energy sources like wind and solar. To get started, customers can visit Arcadia’s website, connect their electricity bill to Arcadia Power, and select a renewable energy project to support.

With Arcadia Power, e-tron owners can invest in renewable energy without the added costs of a rooftop solar installation. Any owner—no matter if they rent or own their home or apartment—can subscribe to a remote solar project by signing up for Arcadia Power’s nationwide Community Solar program. Subscribers then receive savings on their monthly electricity costs, depending on the project’s energy production.

“We believe Audi e-tron owners are conscientious about how they’re contributing to our collective future,” said Scott Keogh, president of Audi of America. “Wherever they live, Audi is proud to help provide a solution that lets e-tron owners invest in and support renewable energy.”

By signing up, interested Audi owners can join a community of more than 175,000 renters and homeowners in 50 states who are supporting renewable energy.

The e-tron is expected to be delivered to U.S. showrooms in the second quarter of 2019. The e-tron will be the first of three battery-electric vehicles that Audi plans to debut by 2020, as the company anticipates that one in every three of its U.S. customers will buy an electric vehicle by 2025.

Sep 19, 2018Blagojce Krivevski
Meet Renault EZ-PRO: a robo-vehicle and a concierge for last-mile deliveryDaimler Trucks & Buses to invest in Proterra