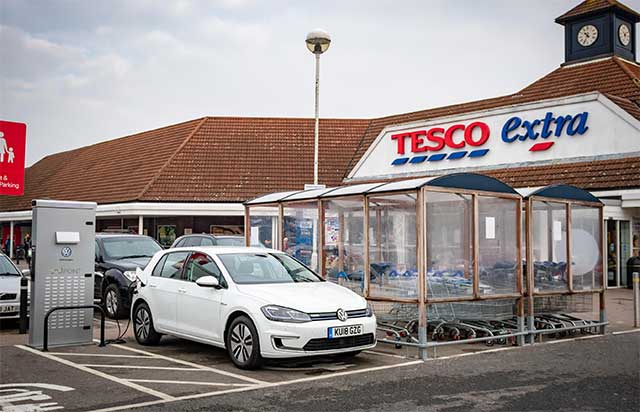 Volkswagen and Tesco announced the development of the largest UK retail EV charging network, powered by Pod Point. The world’s largest vehicle manufacturer and the UK’s largest fuel retailer will roll out more than 2,400 EV charging bays across 600 Tesco stores within the next three years.

The EV charging bays will be based in Tesco Extra and Superstore car parks throughout the United Kingdom, and will be installed by the UK’s largest independent public charging network operator, Pod Point. Customers will be able to charge their electric cars using a standard 7kW fast charger for free, or benefit from the use of a rapid 50 kW charger for a small cost in line with the market rate.

The ambitious initiative underlines Volkswagen’s commitment to becoming a leading player in e-mobility and deliver on its pledge to sell one million electric cars a year worldwide by 2025.

The ID. family of all-electric models, based on the Volkswagen Group’s new MEB electric platform, will begin coming to market here in the UK next year as order books open for the ID. hatch – a fully electric Golf-sized model that will be followed from 2020 by production versions of the ID. BUZZ (MPV) and ID. CROZZ (SUV) concept cars.

Even before the arrival of the ID. family, however, the appeal of Volkswagen’s electric cars is already well established, with the e-Golf and e-up! both proving popular.

Tesco wants to offer customers and local communities an alternative to fossil fuels, and also play its part in supporting the transition to a low-carbon, clean air UK. This builds on Tesco’s commitment to 100% renewable electricity made in May 2017.