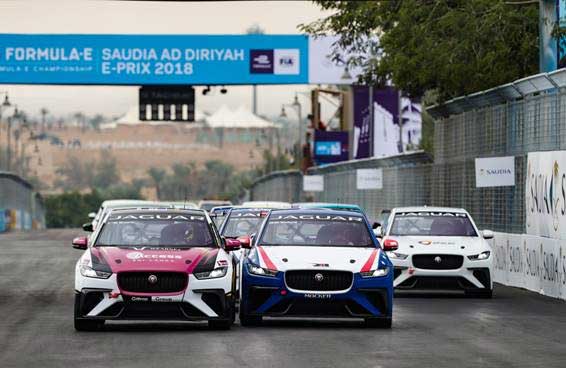 Simon Evans has won the inaugural Jaguar I-PACE eTROPHY race, making history in Saudi Arabia. Evans started in pole position after qualifying was cancelled due to heavy rain in Riyadh.

The starting grid was based on the results of Friday’s free practice session. Jaguar made history with the debut of the world’s first all-electric production based championship, which took place in the historic surroundings of Ad Diriyah.

Jaguar’s VIP driver Alice Powell won the PRO-AM category and placed fifth overall, after starting in seventh position. Powell, Katherine Legge and Célia Martin were among the first women ever to race in Saudi Arabia, and the race was the first time men and women competed together in the Kingdom.

Kiwi Evans led the race for 23 minutes + 1 lap, after an extra sighting lap was added due to changing conditions. He was closely followed by Bryan Sellers until the penultimate lap, when Sergio Jimenez overtook the American to take second place. VIP driver Alice Powell overtook TWR TECHEETAH’s Stefan Rzadzinski and Saudi Racing’s Bandar Alesayi during a damp and challenging track. Katherine Legge set the fastest lap of the race with a 1:32.36.

Simon Evans, Team Asia New Zealand said: “It feels amazing to win the race from pole to flag – it’s very special. It wasn’t an easy race, and it just shows from the practice times and the race itself, the pack is incredibly close. The very first win is the one everyone wants and hopefully we can continue the momentum to the next race in Mexico.”

Alice Powell said: “The pace was there for me in the first half of the race which is fantastic. In some ways I didn’t expect it, given our times in practice. I knew I had to make my way up in the first four laps, so in the first couple I made my moves and from then on, the car was fantastic. It’s been great to race in Saudi Arabia and hopefully it will inspire some more women to get racing – a big thank you to Jaguar for the opportunity.”

Marion Barnaby, Championship Manager, Jaguar I-PACE eTROPHY said: “What a great race and a fantastic debut here in Saudi Arabia. We battled the weather conditions and were disappointed not to complete qualifying but the race was exactly what we hoped: close, competitive racing that’s exciting to watch. The cars performed well and showed the power and reliability of the Jaguar I-PACE eTROPHY, a production-based car that really shows the public electrification is here. Congratulations to our first winner Simon Evans and to our first VIP driver Alice Powell who fought a hard race and will be inspiring a generation of female drivers here in Saudi Arabia.”