Bosch to present electromobility for semitrailers at 2018 IAA 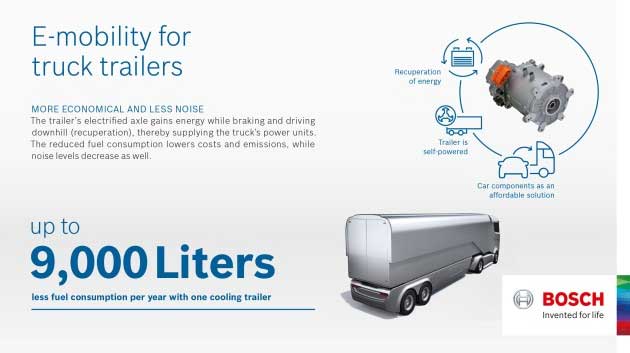 Bosch is electrifying semitrailers, and thus making electromobility possible for today’s semitrucks. At the IAA Commercial Vehicles in Hannover, Bosch will be presenting an electrified axle that can be integrated into semitrailers.

The idea behind it is to integrate an electrical machine into the semitrailer’s axles, instead of simply allowing them to roll freely, as has been the case up to now. This means they can generate electricity during braking, and feed it into the trailer’s power units. In the case of a refrigerated trailer, the saving can be as much as 10,000 euros a year. If the cooling unit is operated using the power generated in this way, Bosch calculates that it can save up to 9,000 liters of diesel a year.

An electrical start and acceleration boost function can help save additional fuel. Any fuel saving also reduces CO2 emissions. One further advantage, especially for deliveries by urban supermarkets, is that electric cooling units make significantly less noise than diesel-powered ones. Deliveries can thus be made early in the morning or late in the evening without disturbing the neighbors.

“Bosch is making trucks’ rear axles electric and smart. Our electrification solution for trucks makes economic sense and shows how electromobility can work even in today’s trucks,” says Dr. Markus Heyn, member of the Robert Bosch GmbH board of management. In addition, the electrical axle is an important step toward automated trailer parking on logistics companies’ parking lots. Adding a powertrain to the axle means that the trailer can be shunted around the parking lot without a tractor.

Bosch offers this technology either for new trailers or as a retrofit solution. The potential demand is huge. In Europe alone, roughly a quarter of a million trailers with a gross vehicle weight of more than 10 metric tons are newly registered every year. One in five of these is equipped with a refrigeration unit.

In contrast to many other commercial-vehicle projects, Bosch engineers are relying on passenger-car parts for the electrified axle. For example, the SMG180 electric motor already features in hundreds of thousands of hybrid and electric cars worldwide, including the German postal service´s StreetScooters. Unlike in electric cars, the motors in the electrified axle work only intermittently, starting only if they can recuperate energy. This may be the case when driving downhill or braking, for example. As a result of this recuperation, which is an established technology in passenger cars, energy is no longer lost when braking, but is stored in a high-voltage battery.

The electricity can be fed into the motors during hill starts, or power the trailer’s refrigeration unit, and in this way save a lot of fuel. Such demand-driven application has a further advantage: since the electric motors are inactive most of the time, recuperating energy or providing assistance when starting or on ascents for only a few seconds or minutes every hour, significantly less expensive production parts from passenger cars can be used in this trailer application. The motors are still powerful enough to move the trailer or to provide start assistance to construction vehicles.

Automated parking at the depot: electric motor is an invaluable helper

In addition, the electrified axle is an invaluable helper for automated driving – only when a motor is installed in the axle can a trailer maneuver independently at the depot. “Bosch’s electrified axle makes trailers independent. By electrifying trailers, Bosch is taking an important step toward automated parking at freight depots,” Heyn says. They also facilitate remote-controlled electric driving on private property such as freight companies’ premises or at ports. Up to now, truckers have had to do this task themselves, or a special trailer-shunting unit has done it for them. Now, however, the electric motor makes the trailer into an independent vehicle that can travel short distances. With the help of additional sensors attached to the trailer and installed at various points in the depot, it will be possible for goods trailers to park themselves.