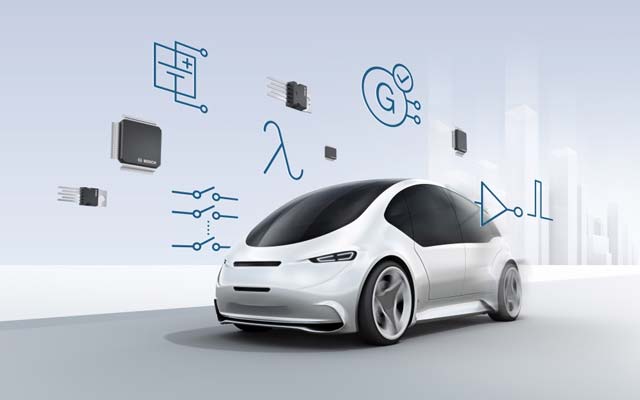 With more and more electric cars on the road, many drivers are increasingly uncertain what they should do or not do in the event of a collision.

Electric motors also present rescue crews with new challenges. In fact, like any other vehicle, electric vehicles are equipped with safety features for such events.

For example, Bosch semiconductors help prevent the risk of electric shock after an accident. Specially designed microchips deactivate the vehicle’s power circuits in a fraction of a second. This enables rescue crews to set to work immediately and ensures that first responders and the vehicle’s occupants remain safe.

“Our semiconductor technology plays a vital role in the safety of hybrid and electric vehicles,” says Jens Fabrowsky, member of the executive management of Bosch’s Automotive Electronics division.

Bosch supplies vehicle manufacturers with semiconductor chips for incorporation in special systems that safely disconnect the battery in the event of a collision.

“Faced with the growing number of electric vehicles that could potentially be involved in collisions, such systems are absolutely essential if we are to fulfill our mission of helping and rescuing victims of road accidents as rapidly and safely as possible,” adds Karl-Heinz Knorr, vice-president of the German firefighters association (DFV).

For a lot of people, damaged cables as the result of an accident are a cause for concern: the current from the battery could leak into the metal bodywork of a hybrid or all-electric car. After all, these batteries are designed to deliver a voltage of 400 to 800 volts.

But they can rest assured: Bosch semiconductor chips ensure that the high-voltage battery is automatically disconnected, so that nobody at the scene of the accident – vehicle occupants, rescue crews, first responders – comes into contact with current-carrying components. The semiconductor devices are part of a pyrotechnical safety switch system, or pyrofuse.

These systems “blow out” whole sections of the cable connection to the high-voltage battery by means of miniature explosive charges, thus quickly and effectively shutting off the power circulation. Bosch semiconductors play a decisive role in these systems.

If, for example, the airbag sensor detects an impact, the tiny devices – measuring no more than ten by ten millimeters and weighing just a few grams – trigger the pyrofuse. This sets off little explosions that drive a wedge into the high-voltage cable between the battery unit and the power electronics, disconnecting the two. By cutting off the flow of current this way, the risk of electric shock or fire is eliminated.

Complex circuits on a few square millimeters of silicon

The CG912 integrated airbag system IC used in the pyrofuse system is an application-specific integrated circuit or ASIC. The specific application in this case is automotive safety.

“Our ASICs, which are no bigger than a fingernail and yet populated with millions of transistors, are custom-designed to activate safety functions reliably within a fraction of a second,” Fabrowsky says.

Originally developed by Bosch to trigger the release of airbags, the CG912 has performed reliably millions of times in this application. Modern vehicles contain dozens of ICs to control not only safety features such as airbags and belt tensioners but also cruise control, distance sensors, high-beam assist, lane-keeping support, rain sensors, and driver drowsiness detection.

“Nowadays, there is hardly any area of automotive engineering that does not involve the use of microchips,” Fabrowsky says.