Infographic: The Rise of the Global Electric Car Market 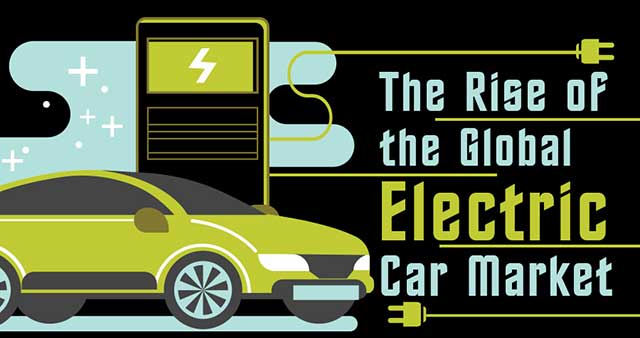 There are now more than two million electric cars on public roads worldwide. While this might not seem like a vast number on a global scale, it’s worth considering that the millionth electric car wasn’t sold until 2015, while as recently as 2012 there were just 100,000 EVs sold to the public. People’s appetite for going electric is clearly growing and, refreshingly, several stakeholders are actively encouraging the purchase of electric cars.

Most EV manufacturers have clearly-defined targets in relation to global sales. Tesla, the world’s leading exclusive supplier of EVs, is aiming to have one million electric sales a year from 2020, while Volkswagen is targeting two to three times that figure by 2025. Honda is perhaps the most ambitious manufacturer in terms of its EV commitment; the Japanese company is hoping that, by 2030, 66% of its total sales will be made up of electric cars.

Governments worldwide are also making solid commitments to promoting electric car usage. In the US, many state governments provide financial support for the installation of electric vehicle supply equipment (EVSE). Meanwhile, French motorists can avail of a tax credit of up to 30% of an EV charging station for home or work, while the Chinese government subsidizes the costs of building charging stations so that this investment is freed from city authorities.

Check out this cool infographic from Southside Motor Factors for a further look at the proliferation of the worldwide electric car market and reasons why EVs have boomed in popularity across the globe.