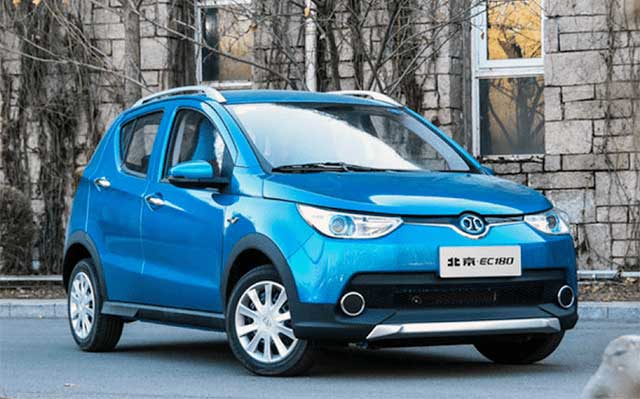 BAIC EC was best-selling electric car globally in the Q1, according to the figures released by JATO Dynamics.

The BAIC EC sold 25,630 units in the first three months of the year, up 260 percent. All of BAIC’s sales came from China, proving the power of the market. The Chinese EV was followed by the new Nissan Leaf with 22,124 units sold (up 47 percent), while the Tesla Model S came in third place with 11,450, down 6 percent. 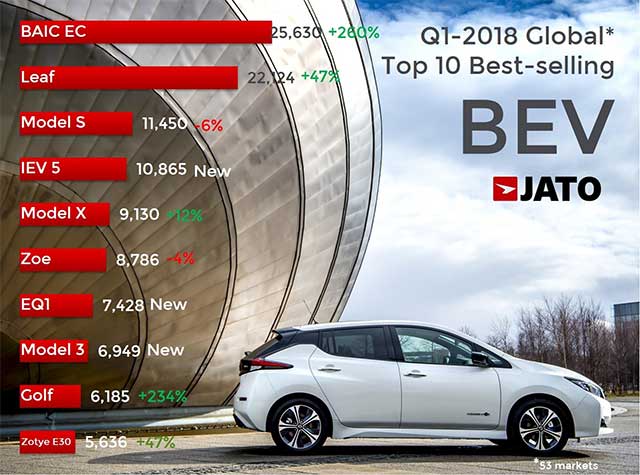 China was the biggest market for EVs during Q1-18, with volume up by 119% to 83,600 units as demand soared. Consumers in China are latching onto the more affordable EVs that are now available, and this is having a wider impact on the overall EV global market. EVs will become the car for the masses – and that is because of China. In fact, the global market share of Chinese brands jumped from 35% to 46% in Q1-18, and they can be expected to grow even further in future as they will start hitting global markets.

Europe came second with 46,500 EVs sold, up by 74%. Norway narrowly beat Germany to the top-spot in rankings by country, but the latter did post a 76% increase to 9,300 units. Germany’s results were boosted by Smart and the e-Golf. On the other hand, France and the UK recorded poor results as the leading brands in both countries registered double-digit falls.

Tesla was the world’s top-selling EV brand, but Renault-Nissan continued to lead the rankings by group. The arrival of the new Tesla Model 3 gave a solid boost to the brand’s sales, selling almost 7,000 units and hitting the top 10 global rankings by model. 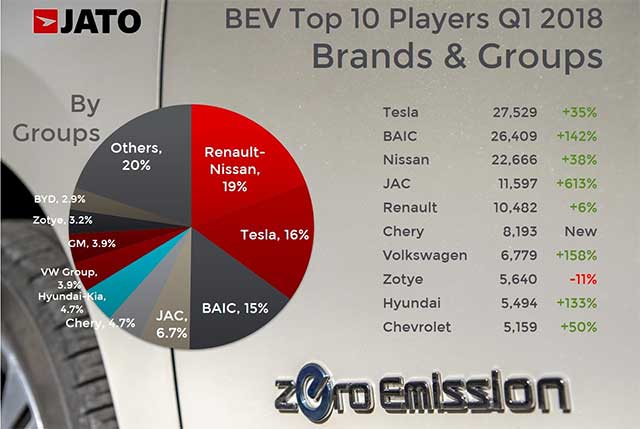 In the case of the EREV, Nissan led the market thanks to its Note and Serena models, which sold 37,600 units between them, and was quite a way ahead of Chevrolet, which came second in the rankings.

During the first quarter of 2018, 1.09 million AFVs were sold worldwide, a 21 percent increase on Q1 2017. Despite hybrids counting for two thirds of every AFV sold, most of the growth came from fully-electric and plug-in hybrid cars.