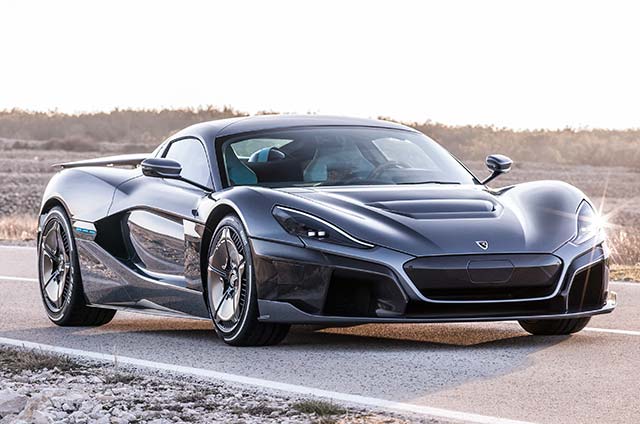 The Rimac C_Two has made its debut at the 2018 Geneva Motor Show and it has managed to wow the audience with their latest hypercar.

Designed by Rimac’s in-house team and made entirely from scratch with all-new, groundbreaking technologies, the C_Two represents the next generation hypercar. 1,914 hp create incredible acceleration of 0-60 mph in 1,85 sec and 0-186 mph (0-300 km/h in) 11,8 sec. The Rimac C_Two EV will reach 258 miles per hour.

Under the skin, the battery pack is 120 kWh in size, giving it a claimed range of 404 miles (650 km) on the NEDC cycle, and can be charged from flat to 80% capacity in 30 minutes when connected to a 250kW fast charging network. 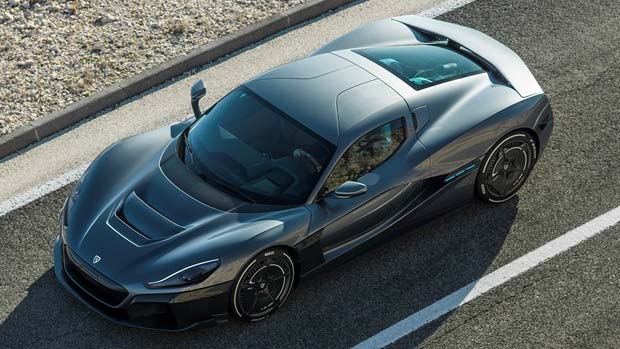 The Rimac C_Two features a full carbonfibre monocoque with bonded carbon roof, integrated battery pack and merged rear carbon subframe. Crash structures are formed from aluminum, and the body itself is pure carbonfiber, with the result that it is both relatively light and exceptionally strong.

Double wishbone suspension with electronically-controlled dampers and active height adjustment provide a smooth and comfortable ride, with four electric motors powering each individual wheel giving both four-wheel drive and unprecedented levels of dynamic control. And while a pair of independent single-speed gearboxes apply drive to the front wheels, a pair of independent two-speed, gearboxes – one for each rear wheel – allow the C_Two to make use of its prodigious torque to produce both mind-blowing acceleration and true hypercar top speed. 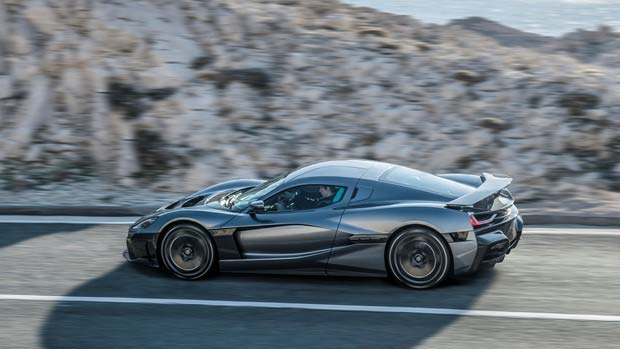 Rimac’s own suite of electronic control systems means that full torque-vectoring is available (and necessary!) to harness 1,914 hp (1,408 kW) of power and 2,300 Nm of torque – two and a half times the torque output of a contemporary hypercar. R-AWTV (Rimac All-Wheel Torque Vectoring) replaces traditional Electronic Stability Program and Traction Control systems and enables infinitely variable dynamic responses, from full grip to extended drifting capability, to satisfy even the most demanding of drivers. With such power comes responsibility: The C_Two is equipped with the latest braking technology. In addition to a maximum regenerative braking of 150 kW, huge 390mm Brembo CCMR carbon ceramic brake discs and six-piston calipers feature on both the front and rear axles, allowing for fade-free, powerful deceleration. 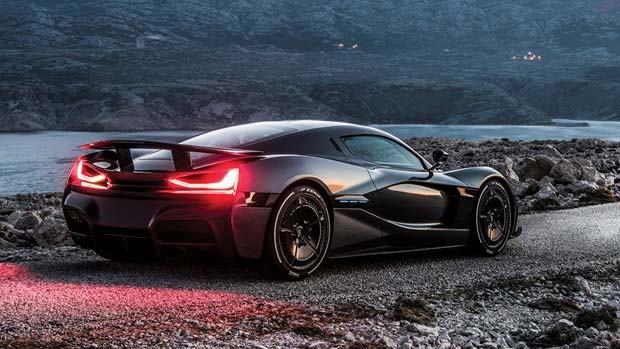 With a top speed of 258 mph (412 km/h), a zero to 60mph time of 1.85 seconds and a zero to 100 mph (161 km/h) time of 4.3, the C_Two makes devastating use of the instant-torque available to an electric vehicle and the traction made possible by the unique drivetrain and bespoke Pirelli tyres. More than that, the C_Two maintains its eye-widening acceleration throughout a full-throttle cycle, achieving 186 mph (300 km/h) from rest in just 11.8 seconds. Such shattering ability equates to a quarter-mile time of just 9.1 seconds – a figure usually only associated with specialist racing machinery. 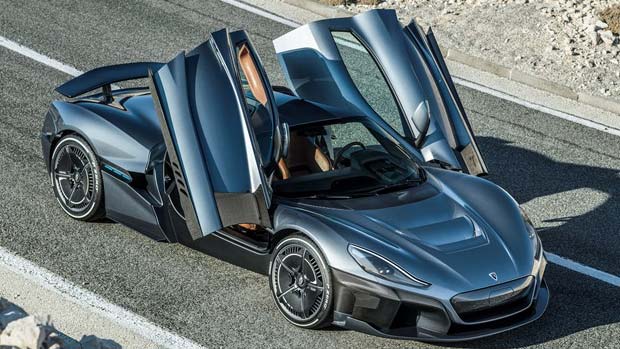 Yet the C_Two is a comfortable, bespoke GT car that has a 650 km (404 miles) range (NEDC), can be charged to 80-percent capacity in less than 30 minutes, and has been designed to be used hard, repeatedly and reliably. This is no fragile thoroughbred; new and innovative, liquid-cooled thermal management systems mean that this is a car capable of two full laps of the infamous Nürburgring at full power – with a negligible drop in performance.

With level 4 ready hardware on-board this is one of the smartest and most connected cars in the world. It is, quite literally, alive with technology. 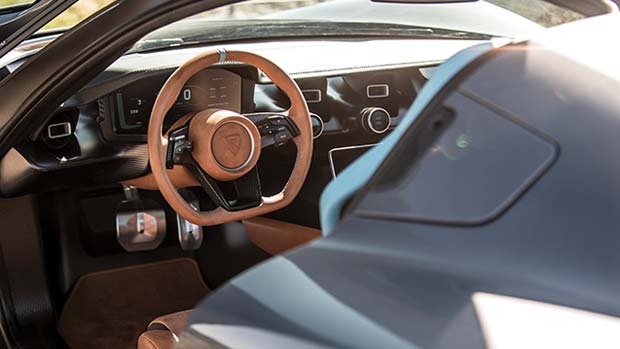 Inside, the C_Two comes not only with three large touch screens, but also with a full ADAS system consisting of eight cameras (including front stereo vision), Lidar, 6 radars and 12 ultrasonic sensors.

Essentially, as part of the suite of electronics that comes with advanced autonomous capability, the Driving Coach configuration in the C_Two can load selected race tracks in real-time, offering clear and precise guidance on racing lines, braking/acceleration points and steering inputs. A near-gaming learning experience, with real-world excitement.

The same artificial intelligence will provide intervention and active safety as ‘ADAS’ (advanced driver-assistance system) while on the road: from collision risk prediction allied to automatic emergency braking and evasive control, to blind-spot monitoring, to lane-keep assist and fully adaptive cruise control including traffic pilot functionality. The car will even adapt its characteristics according to the prevalent weather conditions, changing strategy during, for example, fog or heavy rain. 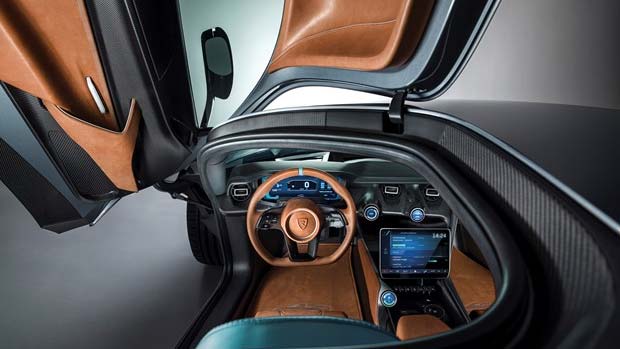 With eight on-board cameras, a lidar, six radar emitters, twelve ultrasonic sensors, as well as an exceptionally precise global positioning system and IMU sensor for autonomous driving, the C_Two is one of the most sensitive and connected series vehicles in the world. In terms of raw numbers, the car produces six gigabytes of data per hour of driving, and six petabytes in 1000 hours. To put that into context, the entirety of human history can be neatly encapsulated in just fifty petabytes. Indeed, to process the amount of information produced by the 400 various sensors present on the car, the C_Two is equipped with 72 electronic control units and processors—equivalent to 64.4GHz or approximately 22 MacBook Pros.

Rimac Automobili is a specialist technology company: a designer, developer and manufacturer of ultimate and bespoke performance electric vehicles. Based in a modern facility just outside of Zagreb, Croatia, it is the brainchild of Mate Rimac, a visionary pioneer of electric vehicle technologies. Now employing well over 350 people, the company specializes in the very forefront of electric powertrains and integrated systems. Rimac is a trusted supplier to global OEMs, from Aston Martin to Renault, Jaguar Land Rover, Koenigsegg, Siemens and many more.