The New TX5 Electric Taxi Is Now Ready For Londoners 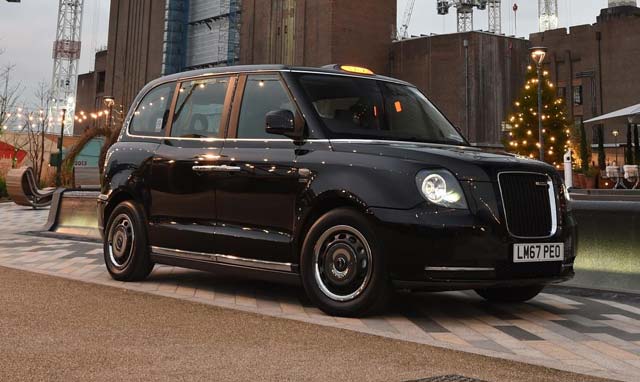 London’s iconic black taxi now has an electric variant that is now fully certified to carry fare-paying passengers across the UK capital.

For the first time Londoners will be able to ride through the city’s streets in the world’s cleanest, most advanced taxi ever.

Having been put through the most rigorous testing regime in the company’s history, including extreme weather conditions in the Arctic Circle and Arizona, plus thousands of miles in the hands of real cab drivers in London, the new TX5 is ready to go to work – ahead of TfL’s January 2018 deadline when all newly licensed taxis need to be zero emission capable.

The new TX5 cabs come just ahead of new rules London is adopting within a few weeks for new taxis to be either plug-in hybrid or completely emissions-free.

More than 9,000 electric taxis, or about half the current fleet of black cabs, are expected on the capital’s roads by 2021.

London EV Company (LEVC), formerly known as the London Taxi Company, expects to sell 10,000 vehicles a year by the turn of the decade, half of them the UK.

This landmark moment was celebrated at Circus West Village, the first phase of the Battersea Power Station regeneration, which is now open. The entire site has been designed to futureproof for a mass adoption of electric vehicles with the infrastructure for almost 1,000 electric charging points planned and the flexibility to increase that. The first 57 charging points are now available for use at Circus West Village. The Grade II listed Power Station building and its surrounding areas is being transformed into a community of homes, shops, offices, restaurants and public space – a vibrant, new town centre for Londoners. Like the TX, both icons blend old and new and are being redesigned for 21st century living, and have a major role to play in the future London landscape.

All LEVC products use its eCity technology comprising of an advanced battery electric powertrain with a small back-up petrol generator. Applied to the all-new electric TX5, the technology allows for a range of up to 400 miles (600 km) including 80 miles (about 130 km) pure electric range.

Unlike the previous taxi, the vehicle’s multi-filter system works to remove gases and particles from the incoming air. In addition, an in-built air quality sensor also automatically closes the external air intake if it detects increased levels of pollution in the outside air – protecting passengers, and the driver, from the capital’s often poor-quality air.

World-class active and passive safety systems will help to protect both the vehicle and other road users too. These include forward collision warnings, autonomous emergency breaking and emergency brake assistance, while the TX5 combines an extremely strong, rigid aluminium body shell with crash protection to the highest international standards, reinforcing the black cab trade’s reputation for safety.

Chris Gubbey, CEO of the LEVC, said:“After extensive testing, LEVC’s new taxi is ready to do the job it was made for: transport people around this great city of London safely, cleanly and stylishly. Better for passengers, more cost effective for drivers, it will play a major role in helping to improve air quality benefiting all Londoners. I am immensely proud of the work we have carried out so far: we have produced a new icon, the world’s most advanced electric taxi.”

Shirley Rodrigues, Deputy Mayor for Environment and Energy, said: “These new electric taxis are at the forefront of green transport technology and will play a transformational role in the Mayor’s plan to phase out diesel and clean up the transport network. This will help to accelerate improvements to London’s toxic air. It’s great to have the first electric taxis on London’s streets and a testament to London’s leadership and that of LEVC. I look forward to seeing many more taxis on London’s street in the coming months”.

Dec 7, 2017Blagojce Krivevski
CES 2018: Rinspeed Snap - The Sum Of Its Parts Is Greater Than The WholePSA Designs An Electrified Light Vehicle As Part Of The European EU-LIVE Consortium