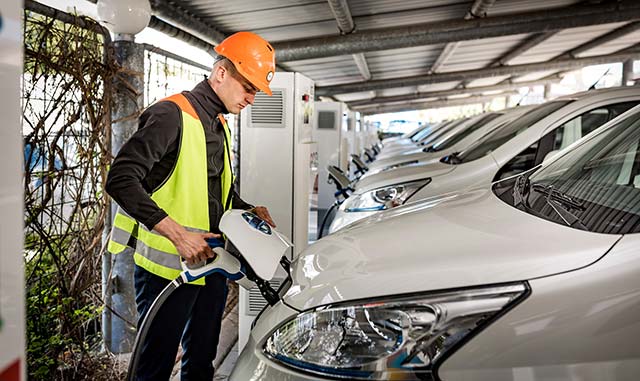 With a fleet of four state-of-the-art vehicles from Mitsubishi, PSA Group and Nissan, the Danish project, Parker, is now demonstrating that vehicles from different car brands can contribute to supporting the electricity grid. An important milestone for the roll out of V2G.

With the demonstrations kicked off in the second half of 2017, the project has now demonstrated that the vehicles are operational and able to deliver services across brands. The first tests conducted by Parker included grid services such as frequency regulation, voltage support and stacking.

For vehicles on a global scale to support the power system optimally, a universal definition for grid integration must be formed so that vehicles can connect with and balance the grid no matter brand and location, which is what the automotive brands Mitsubishi Motors Corporation, PSA Groupe and Nissan sets out to do in Parker together with Enel, Nuvve, Insero, Mitsubishi Corporation and the Technical University of Denmark (DTU).

Parker’s fleet of vehicles consist of seven Enel chargers and four different series produced state-of-the-art electric vehicles from the three different automotive brands mentioned above. The vehicles have already integrated the V2G technology and are thereby capable of providing electricity back to the grid, which not only demonstrates the acceptance of V2G in the automotive industry, but also the partners’ position as frontrunners of grid integration.

Prior to the first demonstrations which were recently conducted, Parker has made a comprehensive test plan, containing 11 services, which will be tested during the winter of 2017. Here, the project will among other things asses the vehicles’ ability to provide frequency regulation, grid overload prevention and do real-time charging in accordance with a CO2 signal which informs the vehicle of when the CO2 emission from energy producers are at their lowest.

By the end of the project period, which will run until July 2018, Parker will be able to define which grid services and technical capabilities electric vehicles across car brands must support, and how these are best combined to balance the power system. Such analyses will be conducted in 2018 where the project will also continue its work towards developing a Grid Integrated Vehicle (GIV) certificate and explore the most viable commercial opportunities for grid integrated vehicles.

Besides demonstrating on the before mentioned fleet, Parker is also interfacing with and pulling data from the Frederiksberg Pilot in Denmark, the world’s first commercial V2G hub. Furthermore, the project draws on the knowledge from previous projects, EDISON and Nikola, which laid the foundation for understanding the electric vehicle’s potential in balancing the Danish power system.