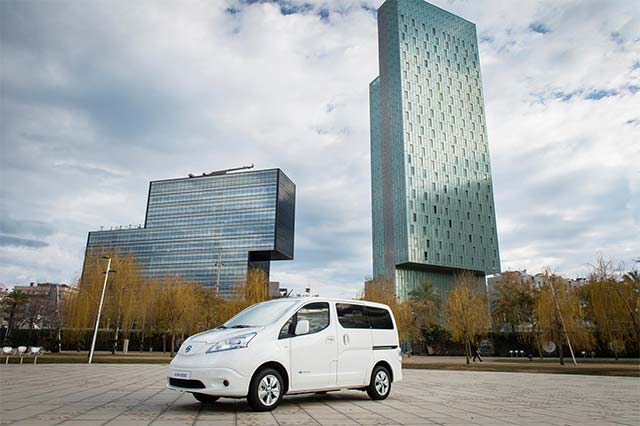 The announcements were made at the third Nissan Futures event – ‘The Car and Beyond’ – in Oslo, Norway.

Paul Willcox, Chairman of Nissan Europe, said: “Nissan kick-started the electric vehicle revolution almost a decade ago. In that time we’ve sold more EV’s than any other manufacturer on the planet. Now, we’re outlining our plans for the next decade, which will see even bigger investments in infrastructure, new battery advances and will even change the way people access and pay for the power in their cars.

NEW VEHICLES
Headlining the Nissan Futures 3.0 event was the European premiere of the new Nissan LEAF, with a special ’2.ZERO’ version for Europe. As the icon of Nissan Intelligent Mobility, the new Nissan LEAF is capable of travelling 378km/235miles on a single charge and is packed with ingenious technology, including ProPILOT advanced driver assistance system for a safer, more comfortable drive, and ProPILOT Park for fully autonomous parking. The car’s e-Pedal technology also lets motorists drive and brake seamlessly, while a sleeker design makes the world’s best-selling electric vehicle even more desirable than before.

Another new product announced at Nissan Futures was the new longer range 100% electric van – the e-NV200. With a 280km/174miles range, Europe’s best selling electric van, can now travel 100km further than ever before on a single charge – a 60% range improvement. And, with no increase in size or weight of the battery itself, customers do not have to compromise in either load space or payload. Crucially, it can help make 100% electric last mile delivery a reality for businesses and professional drivers everywhere.

INFRASTRUCTURE COMMITMENT
Nissan also announced its plan to expand its existing outdoor charging network by 20% over the next 18 months. Working with EV fast charging standard CHAdeMO, the company has already built Europe’s most comprehensive charging network, with over 4600 quick chargers across the region. Nissan now plans to invest in supporting the installation of a further 1000 chargers over the next 18 months.

The company is working with its partners, business owners, municipalities and sector leaders across Europe to ensure the roll out plans are focused on providing maximum convenience to its drivers, with installations on highways, in towns, and throughout key European cities.

NEW BATTERY ADVANCES
Nissan also announced its new 2018 range of home and office charging units giving more choice to owners than ever before.

The Nissan double speed 7kW home charger allows Nissan electric vehicle owners to achieve 100% charge in just 5.5 hours – a 70% reduction in charging time from the previous charging technology. The double speed charger has been designed to benefit consumer EV owners, with faster home charging than Nissan has ever offered before.

The Nissan 22kW charger goes even faster, capable of charging your Nissan EV in just 2 hours. Designed for fleet and business owners, the super-fast charger can also be purchased by consumers who want an even quicker charging experience.

Nissan also showcased its new home energy storage system, which follows on from the success of xStorage. Created especially for EV owners, customers can plug their electric vehicle directly into the wall box to charge. It comes with its own built in energy storage system, giving customers the ability to better manage their energy costs and even generate their own electricity from solar panels, delivering 100% renewable and zero emission power for their car.

It follows the success of Nissan’s existing xStorage solution, which was developed in partnership with Eaton and has sold more than 1,000 units across Europe in just three months, with 5,000 units expected to be sold by the end of March 2018. Nissan expects to sell 100,000 home energy units by the end of FY2020 in Europe.

The new range of home and office charging units will be available from early 2018.

Over the past year in Denmark, Nissan has been testing this revolutionary new way of driving and today, this has become an offer open to all fleet customers throughout the country. Using Nissan bi-directional charging, customers can draw energy from the grid to power their car or van and then ‘sell’ back to the grid for others to use. This means, once a nominal charge has been paid by the business for the installation of a V2G charger there are no fuel or energy costs; just free power for your EV.

And Denmark is just the start. Nissan also announced a UK collaboration with OVO allowing customers to purchase an xStorage home energy unit at a discounted price enabling them to ‘sell’ back energy to the grid. This helps contribute to grid stability in a world where demand for energy is increasing due to a growing, urbanising population. It can result in an additional expected income for users averaging £350 / €400 per year.

Nissan is already exploring other regions in Europe to make free power for EVs a milestone for the future.

Paul Willcox said: “Step by step we are removing any barriers to electric vehicle adoption – from infrastructure investment, to how people access the power itself.

He added: “Over the coming decades through our Nissan Intelligent Mobility vision, the electric ecosystem will transform modern life as we know it. But while the starting point for it is 100% electric vehicles like the new LEAF and e-NV200, the impact goes much further. With fewer emissions, our cities and air will be cleaner. With more intelligent safety features, car accidents would be reduced dramatically. With better connections between vehicles and their surroundings, the school run or daily commute will no longer be clogged with traffic. And by letting people charge their vehicle and their home from each other, we can use our time and energy supplies more efficiently than ever.”

Total To Operate 2,300 EV Charge Points Of The Belib Network In Paris