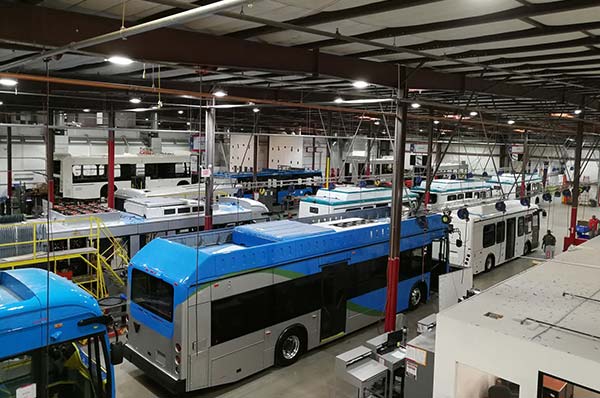 The grand opening celebration commemorated the addition of a new wing to the current BYD Coach and Bus space, bringing the total manufacturing facility to nearly 450,000 sq. ft. This expansion nearly quadruples BYD’s facility from its initial 2013 footprint.

The growth of BYD Coach and Bus reflects a rapid transition to electric transportation and will allow BYD to build up to 1,500 battery-electric buses annually. Since BYD established its U.S. electric bus manufacturing capabilities in Los Angeles County, the company has created nearly 800 full-time jobs throughout the state. This manufacturing facility expansion will enable BYD to hire up to 1,200 full-time workers at top production-line capacity. This manufacturing facility is powered 100% by renewable energy, which is provided by the City of Lancaster’s Energy Company, Lancaster Choice Energy.

BYD has delivered 137 electric buses in the U.S. and Canada, including more than 75 buses delivered in 2017. BYD is currently producing an additional 300 buses based on current customer orders and has options for more than 300 additional electric bus purchases.

The BYD Coach and Bus facility also supports R&D and assembly for BYD’s battery-electric medium- and heavy-duty trucks, including delivery, drayage, refuse, and yard trucks, among other product lines. These trucks incorporate the same proven core components that are used in BYD’s commercialized buses and vehicles with several hundred million service-proven miles. By the end of 2017, BYD will have delivered 70 all-electric trucks to 15 customers in North America, with orders for more than 140 trucks to-date.