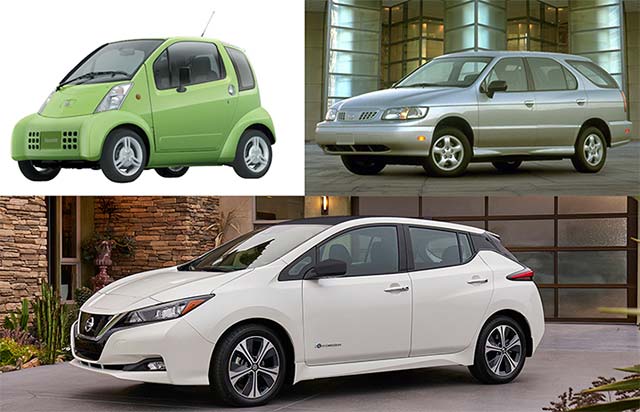 For the 2017 edition of the annual Japanese Classic Car Show (JCCS) in California, Nissan is bringing out some things old, some things new and some things that blew the doors off the competition.

Nissan will have one of the largest and most diverse selections of Datsun and Nissan vehicles on display at its booth during the 13th running of the JCCS, which takes place Saturday, Sept. 23 from 9 a.m. to 3 p.m. PDT in the Harry Bridges Memorial Park at the Queen Mary, in Long Beach, California.

While the JCCS is “dedicated to Old School Japanese Cars,” Nissan is taking the opportunity to share a pair of new 2018 models. The all-new Nissan LEAF is the latest and most advanced electric vehicle in the company’s long history of battery powered vehicles, which traces back 70 years to the TAMA EV. The 2018 LEAF, which made its global debut earlier this month, goes on sale in the United States in early 2018.

The new LEAF features a 150-mile driving range, aerodynamic exterior, a roomy high tech interior and advanced technologies including ProPILOT Assist and e-Pedal. It is the first step in the re-launch of Nissan’s EV platform and will be followed in model year 2019 with a high-power version with increased motor power and battery capacity.

Three other historic Nissan EVs join the new LEAF – the 1999 Hypermini EV, the 2002 Altra EV and the 2011 Pikes Peak LEAF, the first-ever winner of the Pikes Peak Electric Production Class.

Of course, no gathering of classic Japanese vehicles would be complete without the legendary Datsun 510. Launched in October 1967 as a 1968 model, the 510 is celebrating its 50th anniversary at this year’s JCCS. Nissan is displaying a 1972 510. The original “4-Door Sports Car” went on to sell more than 300,000 units. The Datsun 510 was named by Road & Track as “one of the most important cars of the 20th century.”

Not to be overlooked is Nissan’s performance and competition heritage, which will be represented by a 1994 Nissan D21 Hardbody Bonneville racer and a 1970 Datsun 240Z F/GT Bonneville record holder. In addition, legendary three-time Formula DRIFT champion Chris Forsberg is bringing the heat with a pair of Nissan vehicles – an 800-horsepower Nissan 370Z and his custom Nissan TITAN XD pickup and trailer.

More than 7,000 spectators are expected to view more than 350 classic and specialty Japanese vehicles at the event.

Here’s a brief look at the Nissan’s electric vehicles on display at the 2017 JCCS:

1999 Nissan Hypermini EV
Nissan produced 219 Hypermini Electric vehicles between Sept. 1999 and Dec. 2001. Only 26 came to the U.S., with 15 used in trials at UC Davis and 11 by the city of Pasadena. Some privately owned examples can be found in Japan. The Hypermini featured lithium-ion batteries that provided a range of approximately 71 miles on a charge. The electric motor would take the tiny two-seater to a top speed of 62 mph. 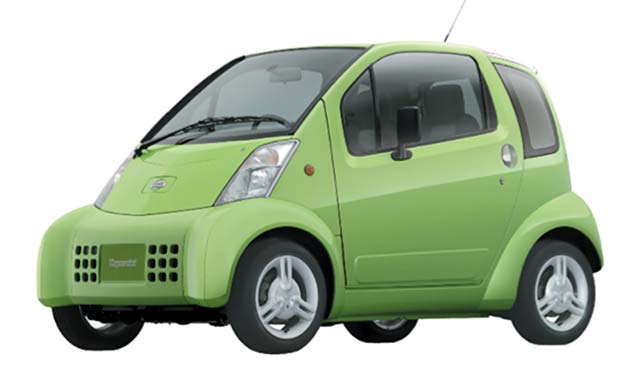 2002 Nissan Altra EV
The Altra EV was a variant of the R’nessa minivan in Japan converted to battery-electric power. Approximately 200 Altras were produced from 1998-2002, and they were used primarily as fleet vehicles for electric utility companies. The Altra was the first “production” vehicle to use lithium-ion batteries. Altra had a top speed of about 75 mph and a maximum estimated range of 120 miles (city) on a five hour 200V paddle induction charge. 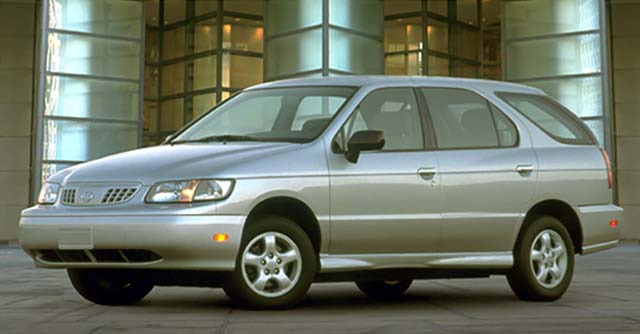 2011 Pikes Peak Nissan LEAF
This first generation 2011 Nissan LEAF became the first-ever winner of the Pikes Peak Electric Production Class on June 27, 2011. The bone-stock LEAF, with a stripped interior, a roll cage, safety equipment and sticky tires, streaked up the 12.4-mile, 156-turn course in 14 minutes, 33 seconds in the hands of professional off-road racer Chad Hord. In 2011, the Pikes Peak course still had dirt and paved surfaces. 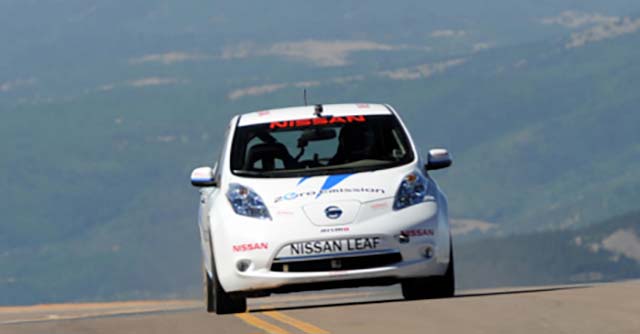